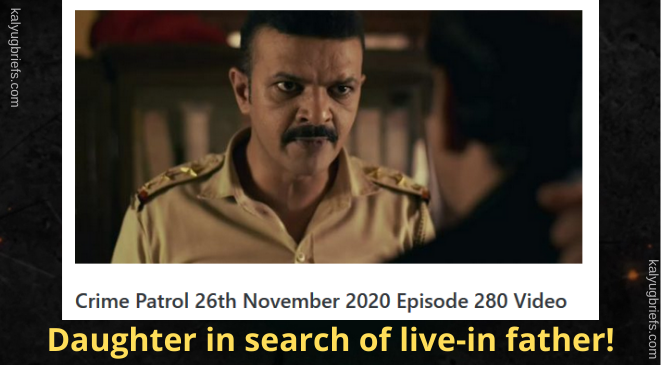 Through this episode of CP (Crime Patrol) following things are revealed:

1. How extra-marital affairs can ruin lives.

2. How black magic and tantric practices can cost you your life!

3. How a fatherless child suffers endlessly.

4. What type of girls reach the sex-market and readily accept prostitution as their profession!

5. Massage parlors are speedily turning into red-light area/zone – where females massage males and then engage in sexual activities with them!! wah! What an idea sir ji!!

A building contractor – married with children – goes to a small town/village and engages in extra-marital affair with an available female. She begets him 2 daughters. As the daughters grow they want thier father to stay closer to them and for longer periods of time. The father already had a family in Lucknow and he had no interest whatsoever to live with his ‘kept’ and her daughters! So his ‘kept’ or as the modern advanced world likes to address this as – the ‘live-in’ partner decides to take the help of a tantric to keep him captive and under her spell. She cut lemons, used bones of dead humans etc. To keep him by her side! Male got afraid of her black-magic tricks and runs away from her – meaning he stopped coming to her altogether!

Meanwhile, the villagers found out that the female engaged in black magic tricks and stone her to death – thinking that she may harm them in future! Mother dies keeping the 2 daughters as orphans! As the daughters grew (how they grew, who took care of their food and lodging is not shown in the serial), the elder one decided to look for her father! She goes to Lucknow and readily becomes a sex-worker at a massage parlour.

She eventually finds her ‘live-in’ father who asks her to get lost! Since she was a sex-worker anyway, she fell into wrong hands – i.e. in the hands of political party goons and dies! One of the chaps among the goons was her ‘supposed’ father and her brother – born to the legally wedded wife! So basically we can see that the ‘building contractor’ carried seeds that gave birth to souls who would be tormented endlessly on planet Earth – because his daughter born through his ‘kept’/ live-in partner turned into a prostitute and his son – born through his legally wedded wife turned into a gigolo/ pmp and a part time political party thug whose job was to provide the political leader with sex-workers!