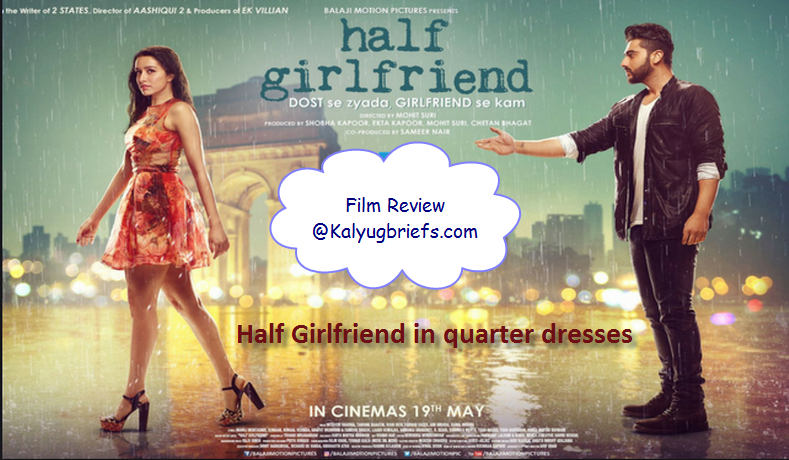 A boy – Madhav – gets his entry in a famous Delhi college due to Sports quota. He is from a small district of Bihar and is the Prince of the District. He was from a Hindi medium school. During his interview he was told that the classes will be held in English and he will really have to improvish on his English. He nods but speaks in Hindi during the interview.

Next, he was to give his sports examination – prove how good was he in basket ball. While he waited to the team to finish their game, he saw a girl…as sweet as can be – well according to him! She was very fair and had sportswear on – which amply showed her fair and waxed sexy legs – she was half-clad…no 1/4th clad actually (see image below)…so the name could also have been quarter girlfriend! 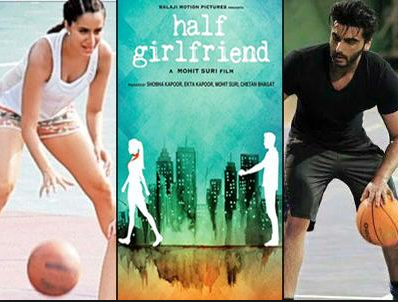 Well not his fault actually, he was from a rural area where girls were not even educated ( The girls were not allowed in school in his village because of poor toilet facilities for girls…although they probably went to the fields early in the morning to answer nature’s call…but midday school time…where will they run to if they wanted to pee? – so? NO education for girls!). They probably all wore salwar kameez and sarees …so he had never seen such a semi-nude bombshell in his entire life! He was also shown as a shy character (will tell you later why or how).


While standing as a spectator he gives her some hints on the moves she should make to win a goal. The girl – Riya – follows them and manages to win a goal. They become friends. Madhav was totally enamoured by her – her looks, skin, English speaking skills…but Riya was just okay with a guy who was good at basketball and she wanted to learn some moves from him. Riya was very rich and already had an equally rich boyfriend. Riya’s parents were not very happy couple and often fought – screamed and shouted at each other that left Riya sad and lonesome. She took out her depression by playing the guitar and singing alone.

Madhav and Riya begin to spend more time with each other. She invites him to her house at about midnight and sneaks outta her house for a long bike ride…wow! such a cute and innocent girl! Wow! Sneaking out of the house with a boy at midnight is such a sweet and innocent thing to do! When he drops her back – she kisses him on his mouth! Well – she had a steady boyfriend – may have kissed, smooched and even slept with him…so kissing a random friend did not matter to her much! But for Madhav it was a very big deal – he had never kissed before in his life (remember he lived in a rural area where girls might not have been educated but they must have had the modesty to keep to themselves – maryadas….which Riya lacked – broken family kids na – they can get away with anything – they can take to drugs, sleep around, party till 4am – everything! Children nowadays pray to God for a broken family so that they can indulge in all sorts of lifestyles that films show I guess!

Madhav thinks that he is in love and so is she in love with him! A village simpleton could not imagine that females in cities kiss around and do much more with many guys…but his friend from the same village – Shailesh – was more worldly wise – he knew that Riya was just using Madhav for learning basketball and go around with for long bike rides…and entertain her basically.

Shailesh warns Madhav that she was just using him and not at all in love with him. When Madhav does not agree, then Shailesh asks him to test her. How? Ask her to come to your room…he suggests. And? And get into a physical relationship with her..if she agrees that means maybe she does love you!….poor males – they are so innocent! After all even Sahilesh was from a rural Indian village – he actually thought that females still think that virginity is a big deal – to be kept only for husband! Little did they realize that Riya could actually have had a physical relationship with Madhav and yet not make him her steady boyfriend – or marry him! There are many kinds of girls in this world you see – Riya could have just used his macho-ness and had fun with him….just like males have fun with random girls without any intention to marry them at all! We all know how some dumb females follow dull and loser males blindly…so even they sleep around with whoever catches their fancy!

Anyway, Madhav manages to get Riya in his room…but before he could do anything, Riya goes out of the room…but all the boys outside the room start catcalling and whistling at Riya…..yuk! what  a humiliation..esp. when you haven’t  even done anything! Amazing that girls are allowed in boys hostel!! What kinda education Institution is that!? Of course you cannot stop consenting adults to copulate with anyone they want … but definitely not in school or college premises! If you are so sex-starved & desperate, then you may hire a sleazy 1 star hotel room for the needful…but not malign a place where people go for knowledge. This way other studious students get derailed from the right track!


Riya breaks off with Madhav ……and later invites him for her marriage. She shifts to London with her husband. Madhav could not get over sexy Riya….he goes back to his rural village but sulked all day long. He rejected campus placements and all he did was sulk…much to his mother’s concern. One day, somehow he manages to assemble himself again and tries to help his mother to run the school and raise funds for the school so that girls could also attend school.

HE meets Riya again after 4 years! She had divorced her childhood sweetheart because both the hubby and her mother in law used to beat her up!!cripes!! and I always thought that such things happen in rural bastis!

Now let us ponder on this grave situation!

So what was it that her hubby was seeking in her? Why was he beating her up?

What does the above mean then? – however educated, pretty looking and bold and adventurous a girl might be…she still may get beaten at her in-law’s house? Why!? What is the way out!?

Anyways, back to film:

Madhav brings her home and introduces her to his mother. His mother takes an instant dislike for Riya – a girl brought up in a broken family and herself broken away from her hubby – the same query must have arisen  in her mind too…why was she beaten? Why did she have to part ways? These things are not made clear in the film – a very important factor has been missed…by Chetan Bhagat? – well I have not read his book…many things become different from story to screenplay stage!

Her mother requests her to get out of Madhav’s life. She gets out…but before getting out she confesses that she had fallen in love with him…but was about to die of cancer..so no point in being together.


Madhav then reaches the US. Looks for her in night clubs to see if she had taken ‘singing at clubs as her profession’ (something she mentioned him on top of India gate…that they always successfully climbed by dodging the security guard!.)

Riya had taken total sanyas from her previous world…her parents never found her out, she had no social networks, no virtual friends…why? because if she had, then Madhav would search for her and he will want to marry her and she will have to be at the feet of a reluctant mother-in-law all her life! So she was existing in the most expensive country without any financial support from anyone but her own guitar and singing capabilities…that sounded like a duet of a crow and a toad!

Madhav had put up at Shailesh’s house in the US and whereas Shailesh had picked up good English…Madhav remained the ganwaar – in spite of 3 years of exposure at Delhi University….he still could barely manage to speak…how did he pass the University exam is still a mystery…when it was mentioned that classes were held in English!

Madhav finds her! Yipeee! They dive on bed – yippee…something he had tried 5 years ago but had failed to bed her…they get married and lived rurally ever after at Madhav’s village!

PS: Attn: Boys, please understand that now you all are being made the target – initially girls have been duped by fairy tales – Cindrella (poor girls married Prince), Snow White (Prince finds her), Sleeping Beauty (Prince awakens her with a kiss) – all this is bullshit – do not think that a real life filthy rich Riya would be so sacrificing that she will give up her riches and comfort for a village rustic like Madhav! Please don’t go to sleep…girls have slept enough with such stupid dreams….