Repercussions – A request to Page3 Journalists. 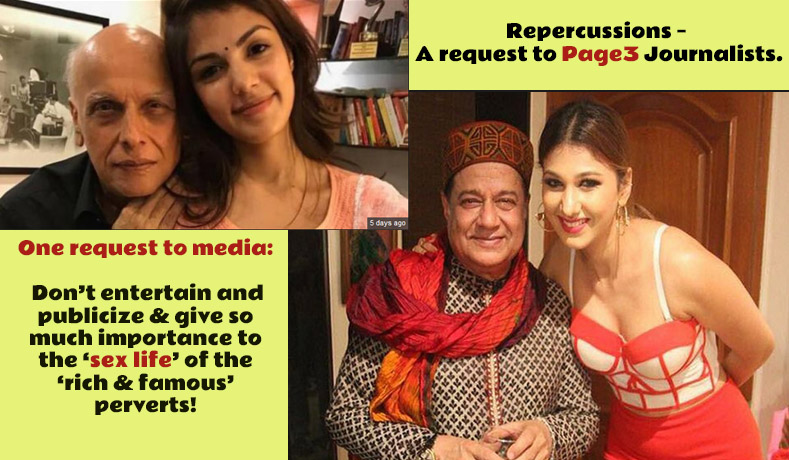 Repercussions – A request to Page3 Journalists.

I really don’t know whether the rumors that are making the rounds on social networks have any element of truth in it – the recent cases of ‘aged males’ getting to mollycoddle/ eff  females as young as their grand daughters – may be just a stunt to increase the TRP rates of the show or be in the news for whatever reason!

Problem will be with the below-average brained daft aged males who maybe be retired with no work. Such news may excite them and raise their expectations and they may even start to try out their luck with young girls!! Domestic helpers are worst hit when such implication or possibilities are made available to mediocre males…. as they are the ones who are available in their vicinity!

Sexual harassment a work place – a house is a work place for the domestic helper! Poor things are already poverty stricken and they cannot actually afford to report to the cops and lose their jobs! Consequently, they leave the job or compromise in exchange of some money! In fact such happenings are very commonly observed in small towns and cities. So at ripe old age the lady of the house (wife of the aged beep) has to accept the fact that after spending 30 plus years with a male and fulfilling his life with children and even grandchildren, all that she gets in return is some 18 years old illiterate, uncouth, unkempt  ‘souten’ – husband’s concubine…& she has to silently accept her defeat because of fear of societal mockery!


One request to media:

Don’t entertain and publicize and give so much importance to the ‘sex life’ of the ‘rich & famous’ perverts! They are frivolous &  irresponsible and can do anything for cheap publicity – so either stop publicizing their idiocies – esp. related to sex, or construct the news in such a manner that every man will think twice…or 100 times –  before going for any cheap, degrading  or pervert relationship that majority looks down at. Treating such pervert acts with kid gloves is really not going to help – such things are certainly not to be taken so light heartedly but treated with an iron fist.