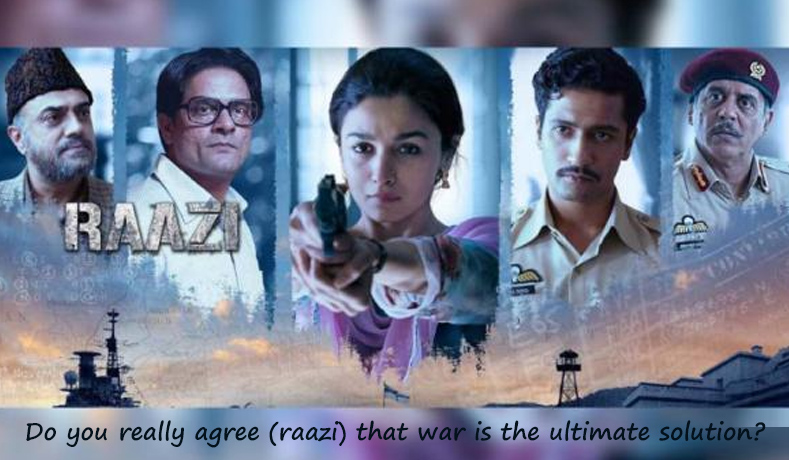 The film is an adaptation of Harinder Sikka’s novel Calling Sehmat which is inspired by real events. It is about an Indian spy married to a Pakistani military officer during the Indo-Pakistani War of 1971 on the order of her father!

Father pretended to be a Pakistani spy but was actually an Indian spy! He was double crossing basically – but because of an oft repeated phrase ‘ Everything is fair in love and war’ – it was deemed okay by all! He was diagnosed of cancer so he wanted to hand over his job to his college attending daughter Sehmat. Sehmat agreed and learnt the nitty-gritties of becoming a successful spy.

She then married a Pakistani military officer and played the role of a wife to him…..but at the same time spying on them and informing the Indian intelligence about their plans. It wasn’t an easy job at all…but she took the risk. She even killed one of the servants because he came to know of her intentions…later she even kills her brother-in-law.

Her husband comes to know about her and he decides to arrest her – in a state of confusion, she survives and witnesses the fact that the Indian intelligence would have killed her as well without much squirms! She also sees her husband die right in front of her.

She manages to reach India and fins out that she is pregnant. She decides to keep the child of the Pakistani. The child grows up to become a Naval officer. Sehmat reaches a secluded house somewhere and continues to live in guilt for the rest of her life…the guilt to killing a loyal servant, a man who was loyal to his Army and also happened to be her brother-in-law…and lastly her husband – all died for no grave reason…like they were not terrorists or rapists or smugglers or murderers – they were just military officers performing their respective duties with full loyalty and integrity!

What a waste of human life!

She Broke Down Completely

A woman is bound to breakdown
When she witnesses the brutality of war
How men are killed mercilessly
In the name of patriotism!

She is a woman after all
She rears the infant in her womb
For 9 long months followed by
Mandatory sleepless nights required to
Take care of the needs of the new born
Followed by training the infant to eat,
Drink, excrete,  read, write, learn….
All this for what?
to be duped, cheated, terrorized, killed?
In the name of National integrity & patriotism?

At the time of Social evolution
When humans were ignorant and hence barbaric,
We can understand the need of wars and strategies to
protect the land, women and children…
But wars are still on…..why?
In spite of so much knowledge & wisdom
Humans are still waging wars against each other
Isn’t that so dumb?

The Defence Services will still be there
To maintain the discipline at borders and within
To beautify Motherland & keep it that way
…all that is fine – but why wage wars?

Wars make women feel the futility of motherhood!
Why on earth should we, the women, give birth to children…
…..later to be devoured by another son – born to another mother
at a different spot on same Mother Earth?!