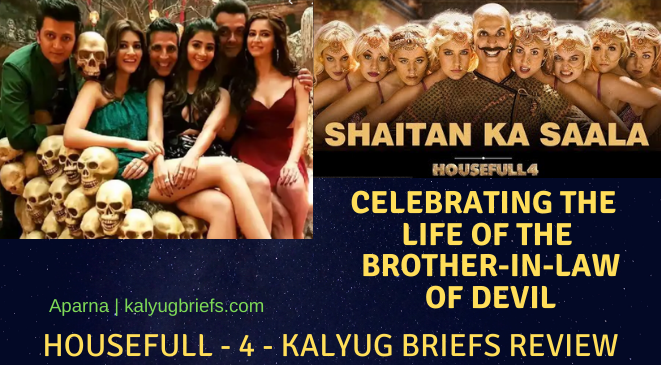 3 pigeons – Neel, Nitin & Mukesh were killed by their own trainers…to be cooked & eaten later for dinner. This happened 600 years ago. In their next birth, they did not evolve any further but were again born as pigeons who could not forget and forgive their masters ! Their way of taking revenge was to shit on their ex-master – whenever he was out. This master (Bala) was a spoilt , ill-mannered, lustful, tyrannical prince who used to exploit his subjects, disrespected women – wives and daughters of peasants and even tried to kill his own father – the king! He was banished from his own Kingdom and he reaches another kingdom where he planned to marry the eldest daughter so that he could become the crown Prince.

The entire film was basically revolving around Bala – the tyrannical and corrupt Prince with the famous title song Bala ho Bala, Shaitan ka sala (Bala, the brother-in-law of Satan/ devil) – this song is a super hit among we, the people and in almost every TV show/ comedy/ romedy whatever, people are seen singing this song! People are actually celebrating this song – that revolves around the Devil and his devilish works/ lifestyle!

Basically shows the ‘collective psyche’ of majority of Indians – we are basically sadistic imps singing songs of glory of the devil!

Anyway, the devil and his companions get killed by a bigger devil !

The females, just like the pigeons, did not evolve any further – they remained like subservient maids – even after 600 years – trying their level best to keep the male members of their species aroused – 24/7 by wearing chinia-choli (tiny blouses) – 600 years ago…..later wearing tiny skirts and shirts that displayed their private parts amply in public!

Raddi review? What other kinda review you expect for a super-raddi film? And don’t go by the figures of how much it made in just one week – remember, the film was released in Diwali – its a holiday for many in India – and Indians love to watch films in an AC hall for recreation!