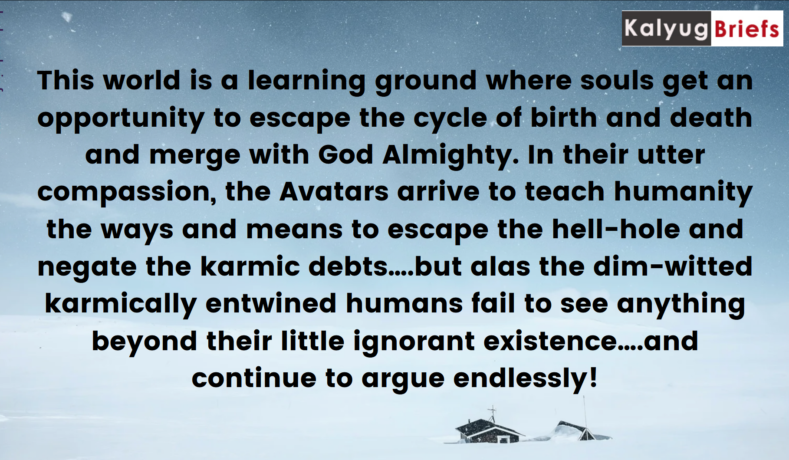 Avatars,Deities, Angels & spiritual Masters come to teach us the way to live….in order to escape the painful cycle of life and death!

I often come across posts where people are seen condemning / bad mouthing deities/ Avataars we (Indians, Hindus) worship ardently. No, I am not surprised at all. I understand samskaars and karmas – based on which humans take their birth. For example demon king Ravana was a mighty versatile emperor during the Treata Yuga and his entire Golden Kingdom was completely burnt & demolished first by Shri Hanumana (Lord Shiva Avatar) and later he (Ravana) got killed by Lord Rama (Lord Vishnu Avatar).

We all know that Ravana had several subjects in his kingdom – those who fought for him, cooked for him, carried on all sorts of administrative works to run the huge kingdom smoothly – so basically there were several denizens in his kingdom who were quite happy & gay under their versatile king Ravana…..they are also born again folks – understand that their cushy comfortable lives got totally destroyed just because their king had abducted a lady living in a mud-grass hut in a dense forest! The same king who had several concubines to pour wine in his glass and dance all night just to keep him entertained….the same king for whom teenage daughters of his kingdom were dying to somehow make their entry in his harem ……that versatile king of theirs had to die in the hands of a stranger with unskilled monkey army (like Sugriv’s army definitely did not have the same high end weapons like Ravana had for sure)!

Although after the war ended and Ravana was killed along with all his mighty powerful sons and Army chiefs, a drama was created where Mother Sita  entered into a burning pyre only to emerge alive & unscratched in all Her glory – showed the power of chastity and purity – but the dim-witted demon army could not really understand what the Lord and His consort were trying to teach…..it was all done for their emancipation …the basis of which is truth, pure and chaste values!

(deep sigh) Anyways, the argument still continues about whether Shri Rama was right or wrong in killing the mighty versatile demon king Ravana!! The same Ravana who created the Shiv Tandav Strotam…his kingdom was burnt to ashes by none other than Lord Shiva avatar Himself (Shri Hanumana) !

This world is a learning ground where souls get an opportunity to escape the cycle of birth and death and merge with God Almighty. In their utter compassion, the Avatars arrive to teach humanity the ways and means to escape the hell-hole and negate the karmic debts….but alas the dim-witted karmically entwined humans fail to see anything beyond their little ignorant existence….and continue to argue endlessly!