Rachna Came By - A Short Story 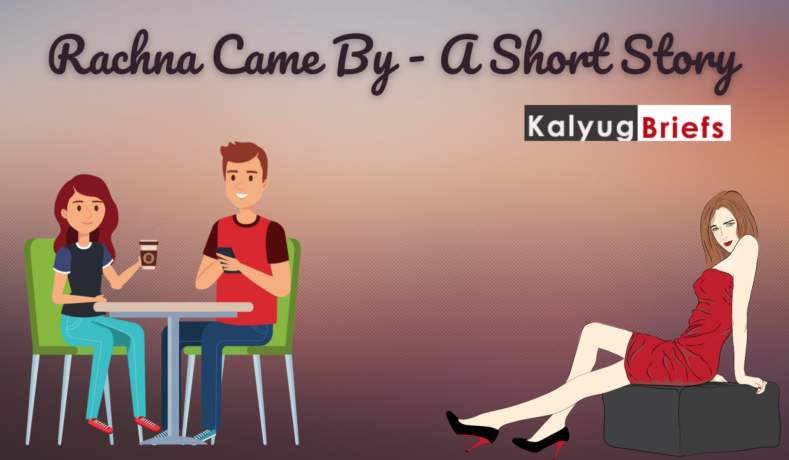 It was the third time Archana and Rakesh met at a coffee shop. Their parents had met before and their horoscopes matched well – so the parents allowed them to meet and know each other well before they finalized on the marriage date.

Rakesh was a software professional and Archana was a college professor. Whenever they were out, they both shared the bill as Archana was very particular about monetary matters. She was not sure whether this will at all materialize into marriage and she did not like to have some such reputation that she fleeces men who take her out for coffee or tea! She had heard her male colleagues and even college friends who talked nasty about girls who made them pay for stuff and then moved on to someone richer! She certainly was not a gold digger so why would she even invite such a label upon herself!

As they were waiting for their coffee and snacks, along came Rachna.

Rachna: Hey! What the hell are you doing here? (she hit Rakesh on his head from behind)

Rakesh : OMG! Long time! Where have you been? You don’t even reply to my messages!

Rachna: I was in Goa for the last 6 months…I was the event coordinator… so? What brings you here?

Rakesh: Oh! Meet Archana…my friend…err…maybe my fiancée ..and future wife too. (he chuckled)

Archana smiled at Rachna. Just then couple of men walked in – colorfully dressed and even more colorfully dyed hair…to Archana, they appeared like a bunch of pimps and gigolos! They waved at Rachna and she excused herself and joined them – waving a quick goodbye to Rakesh.

Archana observed Rakesh looking at her with awe and admiration. Rachna was wearing a tight spaghetti sleeved T-shirt and tiny hot pants …that basically made her look like some wannabe Item girl in some B-Grade Hindi film!

Archana: You seem to be very pally with her…was she in your college with you?

Rakesh: Yes…..in fact many thought that she was my girlfriend but then .. as you can see – she is much out my league!

Archana was surprised to hear this comment – out of his league?!

Archana: Really?! But why….. why would she be out of your league?

Rakesh: Oh! She is very ambitious and very forward thinking…we did go around for a while – much like Rachael and Ross from the famous romcom F.R.I.E.N.D.S – you know? Have you seen that series…

Archana: Yeah – I have watched couple of them…yes, I know about how they always came together and then separated again…and it was kind of an infinite loop – meeting, mating, separating then again…Rachael even bears him a child.. out of wedlock….

Rakesh: Yes! (hahaha) infinite loop….that was a good one! My friends called me Ross and addressed her as Rachael…they used to tease me a lot!

Archana: So you were together in college? Is she your ex?

Rakesh: Well – she is the one I told you about – it is so strange that she came here today out of the blue!

Rakesh continued to steal glances at semi-nude Rachna and Archana observed how he was literally drooling at her like a drain pig!

Archana: But why did you break up? She seems good enough…..you both should have continued!

Archana purposely made this remark and wanted to know exactly why they broke up!

Rakesh: As I said – she was always out of my league – I was surprised that she even talked to me…I was lucky to be introduced to her through a common friend – most of my friends were jealous to see us together….she came to my house also and I even introduced her to my mother – but you know na – my mom is a bit orthodox ..basically backdated village rustic type (he said with utter disdain) – she did not quite welcome her well – my mom thought that she was just using me…

Archana : Using you? For what? Sex?

Rakesh: No no….oh come on – can’t you see – she just needs to look at a man once…and he will readily lick her feet and do anything for her – she has no dearth of men ready to please her….its just that I used to photocopy all the study materials for her & reach her the college lectures she missed and worked on her projects – sometimes even neglecting my own project deadlines – I suffered a bit because of this – then I went into depression because she was avoiding me for unknown reasons…. We were almost living like man and wife for couple of months you see – I was paying for the rented apartment through my tuition fees – had a very difficult time arranging for money to pay the rent – I even cooked – but she just left without saying a word…

Archana: oh! So she left…what about the rented apartment ? You still have it?

Rakesh: No – I gave it up when I understood that she will not return – then my mom really took care of me and gradually I got over her…

Archana: But the way she greeted you today- it did not seem that you had parted ways on a bitter note!

Rakesh: Yeah! She had left for Mumbai for an acting workshop and came back after 3 months – but she was living-in with someone else – we met again…and we meet on and off – as I said typical Rachael and Ross story!

Archana heard him out for some more time – the entire evening he spent talking about himself and Rachana. She then insisted on paying the bill because Rakesh had paid the last time and Rakesh gladly let her pay the bill. He looked lost and excited….after all the first love and sex-partner of his life was sitting right in front of his eyes – hardly looking at him…yet he continued admiring her from a distance.

Archana left the cafeteria and reached home. Her mother was talking to her friend on phone when Archana gestured that she had something important to tell.

Mom: What? What’s so important that you made me cut the call?

Mom: We have yet not decided on the wedding dear – we were giving you the time and space to decide on whether you like Rakesh!

Archana: Yeah – a miracle happened today really! Remember you said I should decide faster on Rakesh…

Mom: Well..yes! Usually you decide on the very first hour of meeting the guy…this time you went out thrice with him…so obviously we thought things are going fine between the two of you!

Archana: Yeah – so today I prayed to God – before leaving home – to help me decide on whether he is the right man for me or not!…and guess what? God heard my prayers!

Mom: You mean God asked you to reject him!?

Archana: Oh no Mom – but God made me meet Rachana today – his ex girl friend!

Mom: He had mentioned about his girlfriend before and you had said that past is past and better be forgotten about….how come you are now reacting up on some past happening?

Archana told her mother the minutest of details of the evening get-together – arrival of Rachana, her cheap dress sense, the hooligans she was hanging out with and how Rakesh still felt that she was out of his league and was constantly drooling at her body!

Mom : Ewww…really? Out of his league huh? She is the reason he went into depression for?

Archana: yup! Imagine …. He reminded me of Varun uncle – how Lata aunty used to be so constantly irritated by her husband’s drooly drain pig attitude of staring at girls less than his daughter’s age! Such males never get over the female body – they will always crave for sexier bodies and their poor wives will just be a filler to cook, raise children, wash clothes and utensils…..poor Lata aunty!

Mom: Yes! Poor thing – she was least bothered about makeup! She was a mathematics teacher and she had to leave her job because of birth of twins….she never joined the teaching profession again and she regretted having left the job – or else she could have just kicked him out of her life – poor thing had no financial independence and had to bear up with her debauch husband!

Archana: Well! Thank God Rachana came by and I saw what kind of girl he had fallen for and what kind of desires and choices he has – yuk!

Mom: Very well then – so what should I tell his mom? You don’t like him…

Archana: Say that the horoscopes did not match…

Mom: No why should I lie? And she had the horoscopes matched even before they came to meet us – let me just tell her the truth.

Archana: What truth? Don’t tell her about Rachana – just tell her that I am not comfortable in his company…..something like that.

Rakesh reached home rather late. He was drunk. Apparently, like a waggy tailed dog, he had joined Rachana and her other male friends and they went to party at a night club – of course Rakesh paid the bill because Rachana had met him after a long time and she even sat close to him with her arms around his shoulders!

Mom: You went out with Archana today in the evening right? She was with you all this time?

Rakesh knew that if his mother came to know that he was hanging around with Rachana again – after all the depression he had gone through because of her – she would create a ruckus at this late hour – so just to avoid any altercation, he said yes.

Mom: Oh! I see…at around 7pm Archana’s mother called up and cancelled the wedding.

Rakesh was taken aback by this sudden bolt from the blue – but then he immediately steadied himself.

Rakesh: Ah! Really? – good for her – even I was not quite impressed with that dowdy female – good riddance to bad rubbish!

Mom: A decent and sober girl like Archana seem dowdy to you and some bi**h like Rachana who is basically a gold digger and changes sex-partners like clothes is very modern?

Rakesh: Don’t you bring her up again – she has left me and it is all over! (he screamed feeling frustrated)

His mom immediately understood that his attitude had something definitely to do with Rachana! After all she had brought him back out of depression after she had left him without a word – he used to scream and shout for no reason and he was repeating it again!

His mother did not talk anymore and quietly went to her room. She could not handle another bout of depression and the entire healing process with him. She just mentally cursed Rachana and prayed that she died of cholera or some bigger disease…..she had ruined her good son after all. She sobbed for a while and went off to sleep.