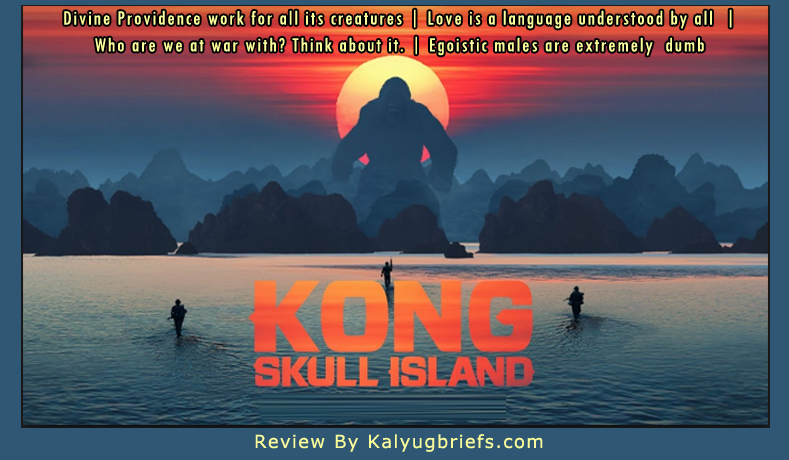 Divine Providence Work for all its creatures

Love is a language understood by all

Who are we at war with? Think about it!

The above 4 points are things shown in the film. Let me take it up one by one:

Divine Providence Work for all its creatures

So this island is away from civilization and covered by Mother Nature so that humans do not come to know of it and the giant species that lived there could not cross over the thick cloud shield to invade the rest of the world.

Now there were simple natives in the island who were afraid of a wicked Lizard – The Big One – and the only ONE entity who could save the simpleton ‘silent’ tribal people was Kong. Now Kong was the lone survivor as the Big One had killed the rest of his family…which meant that his (Kong’s)departure from the island would mean that the simpletons would all die! Simpletons were humans – rational animals – who were probably placed there to learn the things of the world and fight for existence – form rules and regulations for civilized living and gradually know their roots and eventually their Creator – GOD.


Thus couple of humans who were technologically more sound – more evolved than the tribal – were sent to the island. And what do they do there? – they help King Kong to kill the Big One and make the island safer for the tribal inhabitants.

This is how Mother Nature – along with the help of Divine Providence – helped humans – both highly civilized and hardly civilized.

Love is a language understood by all

There is a scene where the lady photographer -Weaver -pats Kong on his face and he returns the pat by saving her from getting drowned and eventually been eaten by the Big One!

A loving gesture is very subtle – it is understood by all – humans and animals…in fact animals understand love better than humans! I had a German Sheppard – he never barked at those who genuinely loved him…but he definitely gnarled at those who were exuding ‘hate’ vibes for him…not ‘Fear’ vibes..’Hate vibes….they understand it all!

Who are we at war with? Think about it!

In the first scene – 2 chopper helicopters crash and two soldiers survive – one from each chopper. They were in war – World War II and each belonged to a different country..they were enemies! As soon as they see each other – they begin to shoot and kill the other one…not realizing for even a second that they are all alone in a secluded island! It is only while they were fighting that they see Kong and realize that there are creatures mightier than them.


They both realize that they need each other to survive and become the best of pals for the rest of their lives.  Shows the futility of war – what a waste of precious human life it is! It did not even take them a second to give up their enmity and hatred for each other….how do you even hate strangers… you don’t even know them! Just because someone has taken birth in another country – he becomes your enemy!? How foolish is the thought!

Col Packard was too shocked to see Kong. His ego could not tolerate or accept the fact that something mightier than MEN could exist on Planet Earth! He had this big ego about the fact that he protected his countrymen from enemies…..so he was under the impression that MEN are the most superior beings on planet earth!

So he decides to kill Kong!! He was not even the size of Kong’s little finger…yet he wanted to finish him!! How dumb can egoistic blokes be!? In the bargain – couple of more soldiers lost their lives! Just to feed his EGO, Packard lost his life too!