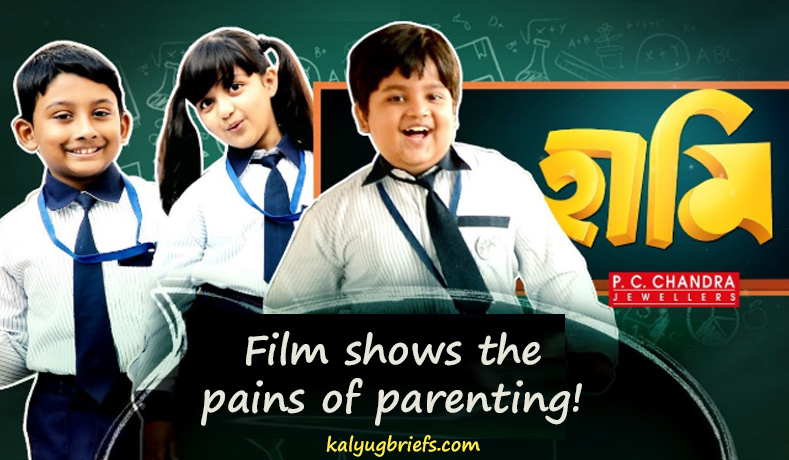 Haami – A harmless & friendly peck on the cheek

Film shows the pains of parenting!

The film deals with primary section – children between the age group of 5-7 years – when their little brains are most active and receptive to whatever is going on around them. Children learn the maximum during this phase of life.

So it is quite obvious that parents become paranoid about who the child is interacting with! There is a scene in the film where a college professor actually asked the principal as to why did she allow his daughter to sit with the son of a nouveau riche furniture businessman!! The businessman could afford to admit his son to an expensive school by paying the fees but what bothered the professor was the values he would be getting through his mediocre minded parents!! Goodness gracious me!! I cannot even imagine that such thoughts can even cross your mind….I have done my schooling from Kendriya Vidyalaya – never have we been made to think like this about anyone – either by parents or by teachers!! This was honestly taking things to the last limit!

But I guess with the rapidly growing technology and with children having an access to smart phones, all sorts of things can be downloaded – so if the parents are careful and concerned – they may be blocking adult rated cheap and sickening blue film clips so that their children don’t get exposed to adult stuff at a tender age….but then there are also parents who are least bothered about such things and probably are themselves indulging in idiocies (ref. Tumhari Sullu – the son in this film carried adult magazines to school…and he was only 9 or 10 years old – and the mother was clueless about her son’s antics)…..children of such parents will definitely ruin all the efforts of responsible and concerned parents!


This is what basically has been shown in the film – various family backdrops are shown in the film – of a businessman, of a locality councillor, of a learned professor…and their respective wives! Children are just the reflectors of their parents after all – and thus in spite of being in the same school and under the same teacher, the children were pretty much individualistic….which represents their family background.

So in this film, a boy just kisses (a harmless peck on the cheek) his class friend – a girl, and she thinks that she has become pregnant…because that is how her mother had explained about pregnancy.

Later by mistake the bus conductor is abused of ‘Child Sex Abuse’ (CSA) but he was innocent. Many things have been introduced in schools like cctv cameras – keeping a watch on the happenings in and around the school – well such things were totally absent during our times.


Although in this film the bus conductor was innocent but we do hear cases and read in Newspapers also about CSA cases in school premises, in school buses too. Such incidents leave a lifelong scar on the fragile minds and hearts of children that later even develops into mental illness!

This film shows how parents have become so paranoid regarding their children ….but then are they wrong? Given the rise in ragging, bullying, rapes, murders, organ harvesting….which parent can rest peacefully when the child is away from them?