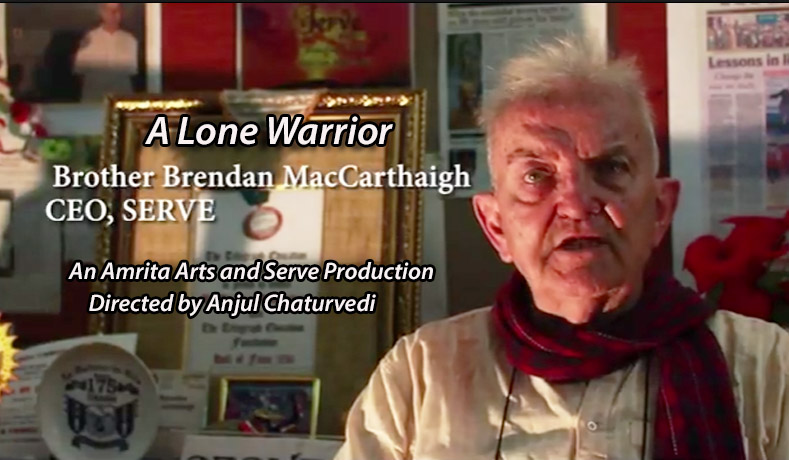 An Amrita Arts and Serve Production, Directed by Anjul Chaturvedi

A Lone Warrior is a documentary film where Brother Brendan has talked about the changes that should immediately be implemented in our education system! Right now, the students are just made to mug up some information and text and appear for exams and then comes the toughest part of it – how did they fair in their exams!? Brother has himself witnessed incidents where parents are literally screaming at their children just outside the examination hall!

Brother Brendan has also given tips to be an effective teacher – his first issue with teachers is a simple query – Do you love to teach? Unless you love your profession, it is better that you stay far away from it! Parents send their wards to school for knowledge but if the one who is imparting that knowledge is not kind, compassionate and loved by his students then there is no use of all the certificates the teacher may be possessing!

The stress that schools and parents give to the students is evident by the number of suicides that are taking place! Brother Brendan has actually kept cut outs of suicide cases of children covered by newspapers mostly because of exam tension and results!!


A little about Brother Brendan:

Seventy-eight-year old Brendan MacCartaigh is one of the last Irish Christian Brothers in India.

“After a loveless childhood from which I had fled to join anything – by chance it turned out to be the Christian Brothers (CB)– at the age of 14 I went through the normal CB training period, which included meeting with great men along the way,” recalls Br Brendan.

So, an Irishman made a beehive, called Calcutta, his home, undertaking a journey not just on the maps but also an inner one- deep within indeed. “Motives purified from Escape to Commitment, and for three or four years after training I taught in Irish schools. Then at age 22 I was posted to India, flying to Kolkata on December 6 1960,” says Br Brendan fondly.

The Congregation of Christian Brothers is a Roman Catholic lay congregation founded in Waterford in 1802 after a wealthy businessman of south-east Ireland, Edmund Ignatius Rice, devoted his life to educating the children of the poor and downtrodden.

His piety, over the years, yielded visible results and such strong was the impact that the congregation, in 1820, turned out to be the first Irish order of men to get a formal charter of approval from Rome.

In 1844, businessman-turned-philanthropist ascended to heaven. But like snooker balls, each distinctively different yet identical in purpose, Christian Brothers continued to spread across the world- more often working for the faceless and the voiceless.

Anyone, who has known or seen from up close an Edmundian, can tell that Br Brendan is an epitome of The Blessed Edmund Rice Ignatius.

“Preach and practice all the variations of love – forgiveness, acceptance, acknowledgement, acquaintance, fidelity, helping, encouraging – all that. Encourage students and whoever else to keep contact with their deity and the associated scripture, if any, on a regular basis,” says the man who has become Indian without losing his own identity, adding that “Edmund Rice has set a mighty high bar.”

Looking back, Br Brendan, surrounded by children, books and some music instruments, seems to be a happy man, who chose India to carry the torch of his congregation, and whom the country also chose.


He might have had a “loveless childhood”, but has grown up to give out love and compassion- in abundance.

Today, Br Brendan can well be termed as a rich man. As The Blessed Edmund Rice Ignatius said, “were we to know the merit and value of only going from one street to another to serve a neighbour for the love of God, we should prize it more than silver and gold.”