Why many girls don’t care about chastity & moral values anymore? 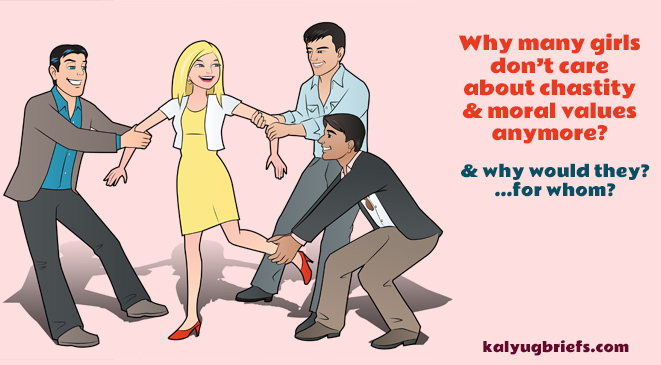 Why many girls don’t care about chastity & moral values anymore?

And why would they anyway?
For whom?
Girls grow up among elderly relatives
And we know all families
Will surely have ‘lafda’ cases – one or two!
(Lafda – scandalous incidents)

As young girls, they witness various incidents
Of how the kind and gentle Aunt
Daily got beaten & bruised
By her alcoholic hubby

Or the pretty neighborhood lady
was kicked out of the house
Because hubby had found a prettier female
To spend his life with!
So now the lady was running from pillar to post
To get her children their rights from father’s side!!

Or how the aged widow in her seventies
was pleading her son to let her live with him
but was ousted by the daughter-in-law
who wanted all the money for herself!
& the spineless son was ready to forget about mother
and lick his wife’s feet forever!

Girls witness the riches & fame
of the same shameless females
who were suspended from school
for misdemeanor and were probably aborted thrice
before reaching the age of 18!
Who changed their boyfriends like undies
Who posed naked in front of the camera
for the rest of the world CREEPS to watch and drool!
They rule the billboards, newspapers and magazines
and those with power & position
actually wait to catch their glimpse…..
And will readily stoop to lick their limbs!

It’s a man’s world after all
whatever they liked, promoted, worshipped or prayed for
that is what exactly they got in return!