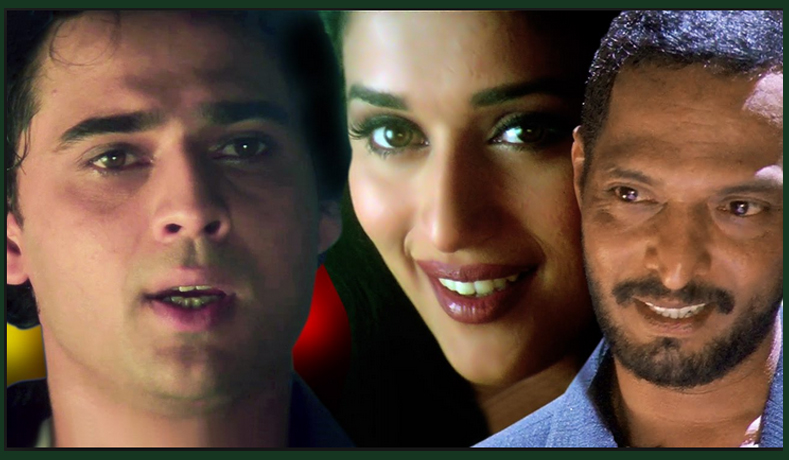 Story relating : What happens when : a Director decides to become an Actor .

Result : Ruckus – a whole lot of it – since Directors are much more versatile than Actors – and a versatile man can either be immensely constructive or highly destructive.

Parents, society, upbringing decides that for any Individual – whether to become constructive ..or destructive. Of course there is Karma Phal, fate, destiny as well – but then Humans are given the capacity – by the Creator – to surpass destiny by a boon called : Free Will.

Malhar (Nana Pathekar) lives in a dilapidated chawl (a single building with many families living in small rooms) is born to a poor typist clerk. He is shown Motherless from childhood. Good in studies, a versatile character – wins trophies in Creativity/ drama but is never appreciated by less educated father – who would rather want him to learn typing and make both ends meet. A sad childhood & adulthood – showing that even if the entire World appreciates or marvels at you – the approval & appreciation of parents is definitely required for success.


Malhar used to write & direct dramas/plays in his college – when he meets Apporva (Madhuri Dixit) a very rich and beautiful looking bubbly girl of his college. While directing and working with her – he falls madly in love with her. In an incident when she wins the Best Actress Award – she calls upon Malhar on stage and gives all the credit to him in front of the entire college – such small gestures of Apporva makes Malhar – of a poor deprived childhood – feel that she loves him too – but it was a misunderstanding.

Meanwhile Apporva meets Nihal (Mukul Dev)– son of a rich Bureaucrat – and they fall in love – he was good looking and belonged to a rich background – so the chemistry was but natural. Nihal’s father approaches Apoorva’s father to ask for his daughter’s hand for his son. This news reaches Malhar – and he thinks that this marriage is taking place without Apoorva’s consent (since he thought that she was in love with him)- he barges in their house to stop the marriage – and accidentally Nihal’s father gets killed – Malhar is sent to jail and Apoorva’s father breaks off her engagement with Nihal since after his father’s death – he had no identity. All three of them separate from each other at this juncture.

Malhar is shown spending his days in jail thinking of Apoorva all the time – in his dreamland – he had already married Apoorva – and even fantasized her carrying his child – he thought of all the things with her that a simple Indian wife usually does ..or is supposed to do – pampering husband , acting innocent, kiddish etc. Although his father never appreciated him – but still he had kept a place for his father in his dreams and thought of himself as enjoying life with the wife and father – all living under one roof as a family.


Malhar manages to escape and then starts his escapades of making quick money – by giving advertisements in Newspapers and focusing mostly on rich widows –after mesmerizing them – he knew all the nuances of mesmerizing ladies – exactly how to win their hearts – since he was well read and versatile himself – he looted them or simply murdered them for money.

Nihal had become a police officer and Apoorva – a Journalist. Nihal happens to meet Apoorva again to solve the mystery of the ‘stranger’ in the city who was looting rich widows and murdering them. Malhar gets a companion with him – an ex-maid of a rich widow – and together they loot people . Malhar starts calling up Apoorva and hinted his next step to her – and she used to write it in Newspapers etc. Ultimately, after creating a whole lot of ruckus – Malhar cames face to face with Apoorva and she tells him that she’d never loved him in her life – and that it was just his dream – he is heart broken, gets caught and he dies in the end.

Some points to notice :

Apoorva organized an Interview with 3 women who had been looted by Malhar – all three of them confessed of his versatility – and the way he had loved them and made them feel important – and the fact that they would forgive him for whatever he had done to them !! Shows how frustrated these Indian widows / spinsters are – kind of ‘desperate housewives’ – who can be fooled easily by anyone with a wee bit of brains and charms !! Frankly speaking – such women better be looted !!

There is a song – ‘ Aur hum tum’ where the maid servant -that Malhar had made as his comrade- is seen singing with him – (by the way – he was having ‘sexual’ relationship with her – in fact indications are given that he was rendering ‘sexual services’ to all the women he had looted – shows that the way to a woman’s heart is also a ‘good hump session’ after all– very similar to what men are infamous for !!- poor men have always been cornered world-wide – the fact that women are equally to be blamed is never pointed out !!

Well in this song the simple lovelorn heart of Malhar is depicted – the fact that in spite of singing / dancing/having sex with another sexy & voluptuous woman – Malhar continues to think of Apoorva – like she, he and his father on his bicycle, eating together in their small dilapidated house (how foolish such men are who think that a Princess living in Palace will come and stay in a hut with him…there are some such cases in this World – but I have heard that such love stories have a very miserable ending in real life!!)


In the last scene – after Malhar comes to know of Apoorva’s feelings regarding him – he goes to his father and makes him type a letter – where is makes his father responsible for all that he was and for all that he’d done – a scene to make fathers understand what their worthlessness, poor knowledge & obstinacy can do to their sons world-wide !

My message to Bollywoodians … Kaise batau main tumhain ki tum mere kaun ho …..(How should I let you know – dear Bollywoodians – what you mean to me…)