The 2 sides of my visiting card! 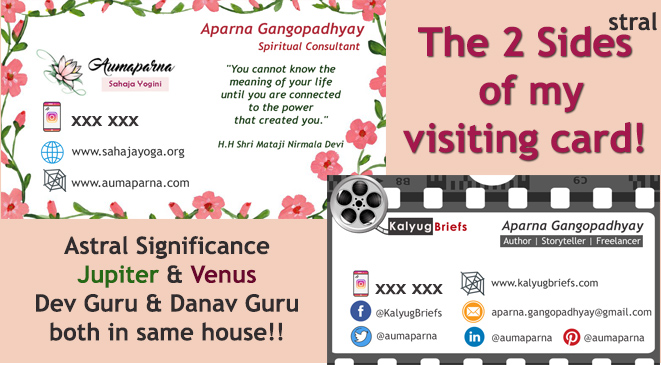 The 2 sides of my visiting card!

If you all have observed…. never mind if you have not observed –what I observed myself in my horoscope –  is the fact that the ‘locha’ placement of 2 of the important planets – Jupiter and Venus – has caused my write ups to be so very contradictory!!

From what I understood by getting my horror-scope read is that …it’s not really me folks! I am totally helpless – like some simple lil’ innocent dove! Two significant planets – Jupiter – meaning Brihaspati, the Guru of Gods and Venus – meaning Shukra – the Guru of Asuras live in the same house…..like address is same : House Number 9 (the 9th house) !! So you see – both the Gurus have to put forward their respective knowledge through me…hence I sound so very contradictory!!

Read on to see what 9th house signifies:

Bṛhaspati appears in the Rigveda (pre-1000 BCE), such as in the dedications to him in the hymn 50 of Book 4; he is described as a sage born from the first great light, the one who drove away darkness, is bright and pure, and carries a special bow whose string is Rta or “cosmic order” (basis of dharma). His knowledge and character is revered, and he is considered Guru (teacher) by all the Devas.[1] In the Vedic literature and other ancient texts, sage Brihaspati is also called by other names such as Bramanaspati, Purohita, Angirasa (son of Angiraa) and Vyasa; he is sometimes identified with god Agni (fire).

Shukra (Sanskrit: शुक्र, IAST: Śukra) is a Sanskrit word that means “lucid, clear, bright”. It also has other meanings, such as the name of an ancient sage who counseled Asuras in Vedic mythology. In medieval mythology and Hindu astrology, the term refers to the planet Venus, one of the Navagrahas.

It shows one’s religious beliefs, whether the person believes in religion or not, if the person would stick to the conservative religious values or question them. Ninth house in Vedic Astrology also gives a philosophical bent of mind. It gives one an inclination towards charity and generous deeds.

This is also the house of luck.

It determines whether fortune would favor you or not, if you would be able to sidestep troubles without much effort or not. It is also the karaka of higher education. A strong 9th house is often found in the horoscope of prominent writers.

9th house represents the journey towards the unknown, to discover what in beyond and above us.

The understanding of the higher realms occurs either through higher education & learning in the form of studying psychology or philosophy or through spirituality.

( Now I see where my spiritual inclination has come from!)

How strong is the 9th house in horoscope also determines whether the person would tread towards spiritual liberation or not.

9th house also stands for father, what kind of relationship you share with him, how lucky you are for him or he is for you and also their financial status. Along with father, it also signifies your mentor and teacher.

Its assessment also determines whether and when you can take a pilgrimage. Invention, research, and exploration also fall in 9th house.

9th house relates to Sagittarius, and Jupiter is the natural signification of this house, which also relates to good luck, wealth, fortune, higher learning, wisdom and spirituality.

In Mundane Astrology, ninth house refers to law, judgment, religious matters, education, immigration, and justice of a country. The strength of your teachings and philosophy of life determines whether you would learn the higher truth and be one with God or not.