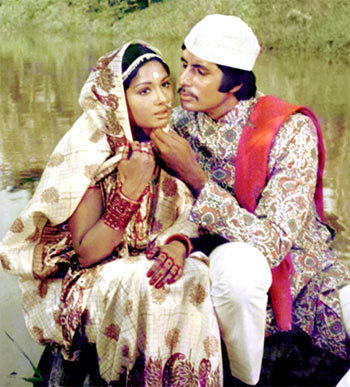 Based on Bengali story, Ras by Narendranath Mitra…lol – Bengali who else!!?

Moti is a businessman (man basically).

He happens to see a voluptuous damsel (Phoolbano) and wants to marry her. Her father asks for dowry (Meher) which he has to collect.

He hits upon a plan. He marries his business associate, Mejubhen (who made gur – molasses) for him to sell in the market. She is an aged (older to him) thin & shrivelled widow. Because he married her – he did not have to pay her plus he was sorted for couple of months – with cooked food and clean clothes & house ready for him. He does not show any interest in eff-ing her though – for she was not attractive enough (this should have been enough hint about his ulterior motives btw….but the grey cells of the entire women clan apparently is on leave…vacationing in some distant island with an imaginary lover)! The poor lady had no clue as to what was his trip actually!

After all the bodily pleasures, the season of selling comes & Moti asks Phoolbano to prepare gur. She was more into ‘sleeping & having fun’ and making gur was something that she was not very fond of. She gets busy in beautifying herself and manages to spoil the gur recipe!(famous song ‘sajna hai mujhe’ – after which she gets a tight slap from the same sajna! – lol).

He eventually takes her – shamelessly – to Mejubhen so that she could teach her to make gur. Film ends here!