The Wonder on Netflix - Review by Kalyug Briefs 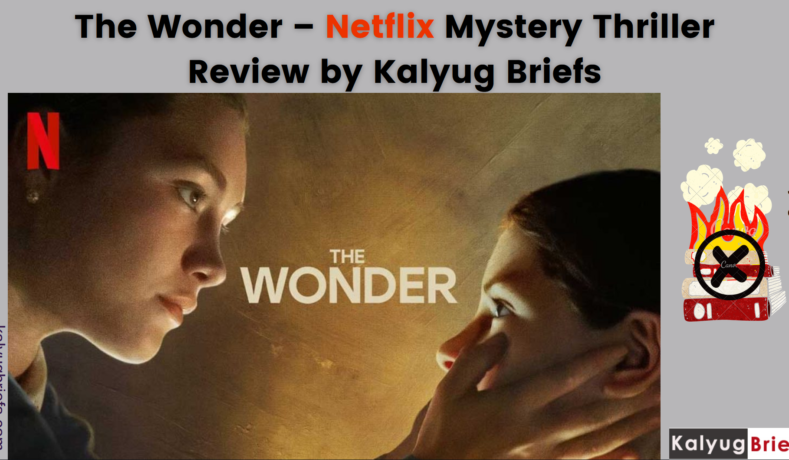 Watched this film – The Wonder on Netflix

Film about superstitions – set in The Irish Midlands in 1862. About people waiting for divine miracles. About people hoping to witness God’s miracle and can go to any extent to make Biblical stories come alive and become a reality. People hoping advent of angels who will release them from their miseries….they had already suffered from a deadly famine attack & were badly shaken inside. Their sole ray of hope – Lord Christ and Mother Mary. Then there were scientists who wanted to prove that humans should have the capacity to create their own miracles as we that the most superior rational animals….also if salamanders can regenerate their lost limb or when plants can make their own food just with the help of sunlight – why can’t humans too manifest such miracles!

So in the midst of all this,  poverty stricken family begin to claim that their 11 years old daughter does not need to eat anything at all and yet she is doing fine – meaning – she is being fed directly by God – Manna form Heaven!

Thus a nurse and a nun are recruited to keep a watch on the girl – so that they certify – in writing -that actually she is not eating anything and then she can be declared as the angel of the era! People had already started visiting her and were giving alms to her parents ….for having given birth to an angel!?

But the truth was very different – which the nurse finds out (cannot reveal since the film is just released) – so the nurse helps the young girl escape from her misery and drama based on superstitions! While doing so – she herself gets over her past traumas and moves forward in life. Well so far, so good. Blind faith and superstitions should never be entertained – esp. when precious lives are concerned.

But there is a scene where they show that the Holy Bible and images of angels as well as the clay idol of Mother Mary and infant Jesus gets broken and burnt. Well….I am surprised that the censor board did not erase the scene! Why burn the Holy scripture that people believe in? There are many emotions and sentiments people (true devotees) attach to Holy / religious scriptures. Humans have obviously failed to achieve peace and justice in spite of education, Human rights, child rights, employee rights, husband and wife rights – blah-blah rights…..so who would humans look for proper…full and final justice ? – Gods of course!…and rightly so too.

So if someone is duping you in the name of God or is wearing the dress of a priest misleading you – taking you straight to hell ….does not mean that God does not exist and that one should burn down all Holy scriptures…..yes, one should definitely punish the person misleading  and taking simpletons away from God…or Goodness – that’s what angels do – punish the wrong doer   (devil, demon representatives) who are ruining the chances of human beings from  achieving their birth right – communion with GOD!

Yes, communion (Yoga) with God is a possibility – humans have done so in the past…and many are still practicing the right path to communion with God.

(also there was a scene in the film where the nun (hired to watch the girl) mentions that she had a vision of an angel – indicating that she saw actually the girl escape with a person……but this statement also suggests that ‘visions’ of angels as described by many people and such tales are also seen in the bible – are not true but just a figment of imagination! – let me reiterate this – Visions of Angels is a reality as well….so don’t lose hope folks….film stories are just a figment of someone’s wild imagination!))

Conclusion – Glad to see that the little girl could escape her miserable life trapped in dire poverty and made to suffer for something that she had no clue about…..not quite convinced about the burning of the Holy Bible,  angel images, clay idol of deities………though Lord Christ had Himself broken the clay idols made by pagans ……..