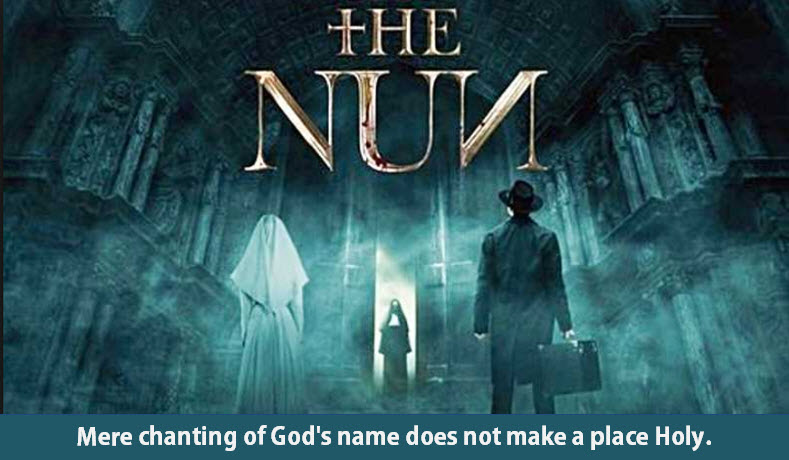 Frenchie, a villager who delivers goodies to the nuns residing at the Carta Monastery, finds a dead body of a Nun hanging at the entrance! The entire village comes to know of it and so does the Vatican who send Father Burke & Sister Irene to investigate the matter.

All three of them, Frenchie, Burke and Irene reach the monastery and are confronted with all sorts of ugly demonic experiences! A monastery that is occupied by nuns who are always chanting the name of Mother Mary and Lord Christ will be infested by demons…? How come?

Such images and films weaken the faith and belief of humans in God! Seems like the entertainment industry is basically working for the demons and devils and helping him (the devil) out to establish his reign forever on Mother Earth!

The film has shown a headless statue of Lord Christ and also shown the cross inverting as the demon approaches the helpless nuns who are chanting the Holy name ceaselessly! Really! So what does it imply? Constant chanting of the name of God is not enough….in fact it is useless? If the chanting of Holy name cannot save you from the tortures of the devil…then why would anyone chant His name?

There is a scene when Father Burke and Sister Irene knock at the door of Frenchie – he opens the door and asks (glancing at Sister Irene) whether the lady has come with an angry father or a jealous husband!? What does such a statement indicate? That he was happily leading an adulterous & licentious life in the village…and also the fact that in his village there were ladies – both married and unmaried – who were sleeping with him for fun and lust.

In a scene the village bartender tells Frenchie that the demons of the Abbey had started infesting the village as well….and that is why young girls were committing suicide and untoward incidents were happening in the village – really!?


What about the 7th commandment ‘ Thou shalt not commit adultery.’ (Exodus 20:14)

Honestly readers, I have never read the Holy Bible fully – but have learnt things – basically the gist of it. Moses is one of the most revered characters in the Christian religious scriptures. (Moses, Hebrew prophet and leader who, in the 13th century bce, delivered his people from Egyptian slavery. ) Giving in to lust, greed, jealousy, anger, avarice etc…all lead you away from God and anything that is holy and takes you on the path of hell – the Kingdom of Devil! So humans who cannot adhere to moral and chaste values, get drunk and consume drugs, womanise and disrespect fellow human beings…cheat, murder, rob, betray…..are all already working for the devil….so why be so surprised by gory deaths and hideous endings!!?

PS: I never watch horror films….this film I was forced to watch!! I wonder why!?

I am sharing a personal experience here – I live in India and during the festive season, our Electricity board carries out some maintenance works and let us know beforehand about the date & time our block will have load shedding! In order to escape the summer heat, me and my friend in the same block, decided to catch a film ….we reached the movie hall and only this film ticket was available….very reluctantly I bought the ticket – because folks – I hate horror films…don’t like the after effects actually – the ugly faces and sudden jerks!! But after watching the film I felt that probably Gods wanted me to see the film (I am a true blue devotee of God actually…cannot tolerate any nonsense in the name of God you see) – such blasphemy huh!?

Sometimes I think the entertainment world is directly under the payroll of the devil! The things they show and the way they show it …it has become pretty evident that their reporting Head is the devil himself! 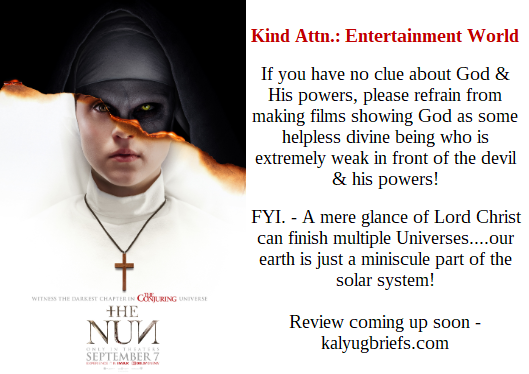 Finally- folks, if you all have alienated yourselves away from God – it also means you have decided to support the devil. The devil only knows to destroy and draw sadistic pleasure upon watching the suffering of human beings.

An example here – suppose you open up a night club with strip tease shows and free flowing alcohol with complete adultery full on…what kind of visitors do you expect to come to your club? Only losers, cheaters, frustrated fools, sex starved creeps, thieves…and other degraded souls…..similarly folks, Frenchie (Maurice) in the film was a womaniser – he was breaking a father’s trust and a husband’s love, he was luring women into lust and making them unchaste – he was already a supporter of the devil…why would the devil not possess him huh?! Devil found an ideal house in his body after all…..ever thought about this?