The forgiving nature of our creator – Valmiki & Angulimala 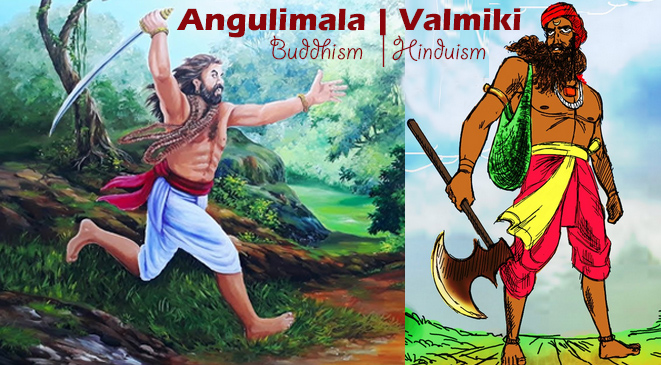 The forgiving nature of our creator – Valmiki & Angulimala

Humans, in their ignorance, can commit mistakes – even gory crimes that they name as sin – can all be forgiven by the great divine benevolent BEING aka. GOD. For example Ratnakar Daku (Hinduism) – a murderer who looted travellers & killed them – turned into Sage Valmiki once he was given the light of wisdom by wise saints.

Another story is of Angulimala (Buddhism) a ruthless brigand who completely transforms after a conversion to Buddhism!

The above two examples show the forgiving nature of our Creator. Although even this is true that in his previous life, Angulimala was a crown prince who was tortured a lot by his own subjects because of his righteous nature! When his enemies kill him, he takes a vow just before his death that he may avenge his death, and attain Nirvana in a future life under the guidance of a master. This version makes it look as though Aṅgulimāla’s killing is justified.

Suffice to say, we, at human level, do not understand the Big Picture – we are not aware of why things happen the way they happen or why we react to some situation in our own unique manner – like same situation but million reactions – how come?- Because each one of us is controlled by several factors – several million factors in fact – astral, karmic, present life knowledge base etc.

So, the creator forgives as long as you are ignorant of the functioning of the higher divine realms. But, in case you are fully aware and knowledgeable about the differences between good and evil deeds and the consequences of it and yet you resort to evil means and ways – you are NOT FORGIVEN – on the contrary, you are so severely punished that the rest of humanity will learn and remember you for your suffering and also – if intelligent enough, will keep miles away from the evil path your walked that brought about your downfall!

‘Intelligent enough is the key word to focus on folks.

Arise, awake, stop not till you awaken your divine consciousness and bring about happiness and bliss for the entire mankind!