The ‘Alien’ fear left me only after I read the Bhagvad Geeta ! 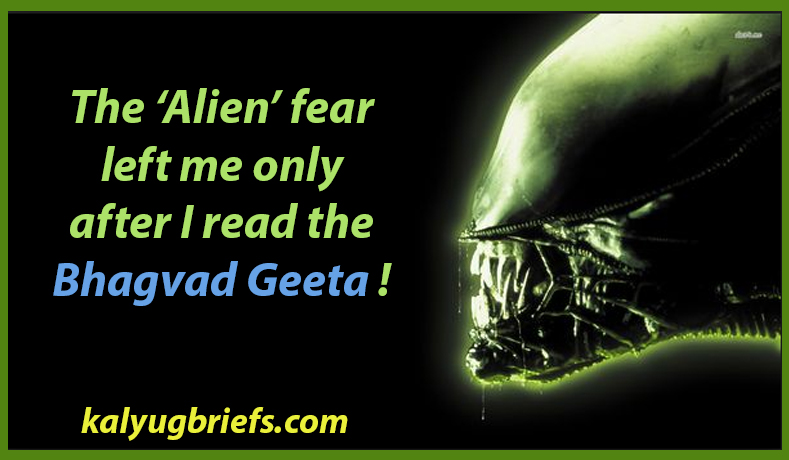 The ‘Alien’ fear left me only after I read the Bhagvad Geeta !

I watched a film ‘Alien’ – a 1979 film, that left me all devastated! I am very scared of horror films actually. We had gone to the Officer’s mess to watch the film – big screen and all. I had no clue as to what the content of the film would be. I was vaguely told that the film is about life on another planet so I went ahead not knowing what was waiting for me….

The film left an indelible mark in my psyche. The film managed to successfully implant ‘fear’ in my heart. Whenever I closed my eyes, I could see the alien monster and the helplessness of mere mortals! I often wondered whether God will be able to save us if some such calamity strikes us Earthlings!

Some time later, my father got posted to Mathura, UP.  Well, since Mathura is the birth place of Lord Krishna, often people exchange Bhagvad Geeta among each other. We too were given Bhagvad Geeta – in short, summary, lengthy, essay, analysis etc. Since it is written in the last chapter of the Bhagvad geeta that ‘whoever reads even 2 stanzas of the Geeta per day, he or she will be eligible for higher worlds….and folks who wouldn’t want a higher place…a promotion for the soul? Yea – we Indians are made aware of the science of the soul, wrath and rewards of the Gods since early childhood through Amar Chitra kathas, folklores, films etc.

So while reading the Holy Bhagvad Geeta, I reached the 11th chapter where Lord Krishna showed His Viswa Roop Darshant to Arjuna. Here are the exact words::

Arjuna saw in that universal form unlimited mouths, unlimited eyes, unlimited wonderful visions. The form was decorated with many celestial ornaments and bore many divine upraised weapons. He wore celestial garlands and garments, and many divine scents were smeared over His body. All was wondrous, brilliant, unlimited, all-expanding.

12
If hundreds of thousands of suns were to rise at once into the sky, their radiance might resemble the effulgence of the Supreme Person in that universal form.

13
At that time Arjuna could see in the universal form of the Lord the unlimited expansions of the universe situated in one place although divided into many, many thousands.

As soon as I read these stanzas…I began to feel at ease….so God is present not just for the earthlings but for every other planet or universe….so he would surely save His devotees.

Phew! This way folks, I eventually got over my fear of the Aliens!

I don’t watch horror films though…it disturbs me a hell lot! One should not watch such films that leave you all dishevelled and devastated!