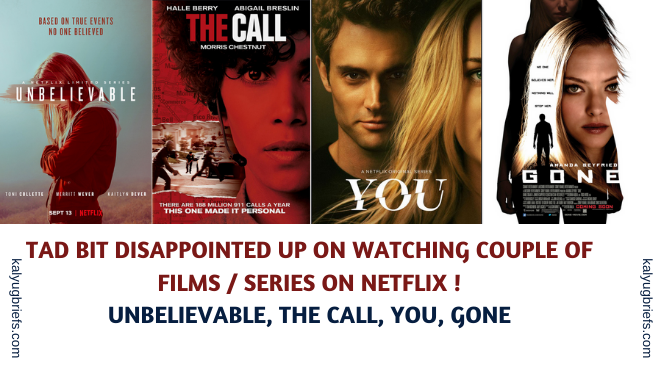 Unbelievable, The call, You, Gone

All the above 4 show the helplessness (uselessness/ sloppy work/ incompetence/ dumbness?) of the Police Department!

Unbelievable – About a girl who is raped and left in her room – but when she tells the cops, they ask her thousand questions – ultimately concluding that rape never happened and close the case! After 2 years, some Lady cops begin to investigate up on a similar rape case and eventually find the rapist!…..like he was out na din the open for 2 years raping and kiliing more women!! If only the cops were more alert, they could have stopped the rape incidents!

A girl is abducted but she manages to call 911 because she was carrying an old model of mobile phone – 2 or 3 times they were very close to nabbing the kidnaper but they lose him everytime! He was a maniac who used to kill women and cut their hair (golden hair specifically) along with he skin of their scalp! The cops used helicopters, other networks to find out the kidnapper – but still they could not trace him!! Ridiculous really!!

Another maniac kind of a guy – adopted by a strict/ tyrannical man – who turns him into a monster basically! His own father had left his mother and the mother then shifted in with her boyfriends – one after the other who abused him (when he was a child) thus turning him into a cold blooded maniac male! He kills 5 people in this series and the cops remain clueless about his murderous ventures!….In the end, he remains as a free male because a very rich millionaires got married to him…..they were rich and the entire Cops department were under them…so the killer got scot-free!! Wow – now that’s a lovely law and order situation in California!!

A girl is kidnapped and thown into a hole in the middle of a forest park. She somehow escapes and tells the cops that she was kidnapped- the cops look for evidence of her kidnap but find none!! She is then sent to an asylum for therapeutic recovery!

After one year, her sister is kidnapped and she traces him down – kills him this time instead….did not believe in the Police Department….just as they disbelieved her the last time and made her go through mental trauma!!