Signs of Marriage – To Show or Not To Show? 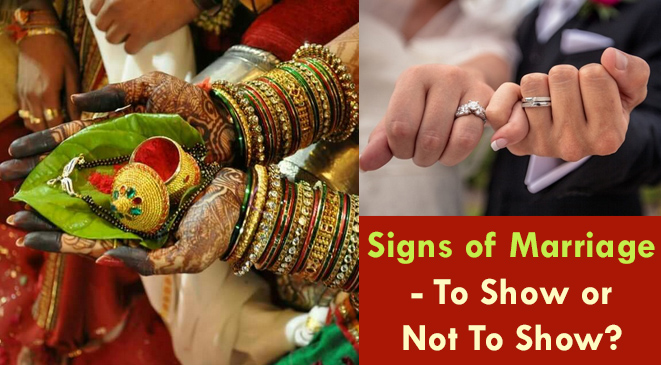 Signs of Marriage – To Show or Not To Show?

In India different states have different signs that show that a woman is married. Vermillion (Sindoor) being the most common. Other signs are mangalsutra, toe ring, nose ring etc.

Abroad, it is an engagement ring – in the ring finger, for both men and women – meaning they are engaged and committed.

The simple reason behind such a sign is – ‘Don’t approach me to propose Sir/ Madam, because I am engaged/ married.

In India, there is a problem though – whereas women have several signs to show they are married, men usually have none! This has led to many controversial discussions – to the extent that now women also want to give up all signs of their wedding by saying things like :

‘What about men? Why don’t they have any sign of marriage?’

‘Such signs are regressive and it started when women were just sex slaves and they had to carry a mark of that slavery!’ – (PS – I really don’t know about this but I recently read such comments in a discussion group!)

So now Indian women (some of them) are speedily giving up wearing sindoor or carrying any sign of marriage! They celebrate their fiercely independent spirit like this! (I know it is pathetic – but its true)

On the other hand, the worker class/ lower middle class and even middle class ladies, wear this sign even when their husbands have left them – why? Because it saves them from indecent proposals coming from loafer males all around us!

Some women take this situation as a compliment too – Let’s say some male proposes them and then they say ‘Are you mad? – I am already married!’. This episode then becomes a big topic of discussion in Kitty Parties and women get-togethers – like ‘ You know he proposed me and then I said – nooo, I am married…I don’t look married you see! – I still look so young actually…he said I look barely out of college…blah, blah blah!’

So after reading this topic, one can understand that people actually don’t have much work left on planet earth but to discuss –

Whether  to have a sign or marriage or not?
Why don’t men have any sign of marriage?
Men may flirt and sleep around saying that he is single – in spite of being a father of 2 kids!
Then shouldn’t wives too have the right to flirt around and sleep with random males who catch their fancy?
More such blah blah blah – so as a result – now we have:

‘Desperate housewives’ (wives calling males home in absence of their husbands – security guard, gardener, liftman, gigolo, dhobi, milkman, garbage picker, salesman etc.)
Consenting Adults (daughters and sons of desperate housewives who had been observing their flirtatious mothers ‘sleeping around’ with different men)- such adults have no moral values and just Eff around randomly. Of course their fathers are also either equally immoral or some poor ignorant male who is slogging like a pig in the office – only to feed a promiscuous wife and couple of thankless children)

Consenting couples (those who play the ‘wife swapping’ game and make merry eg. Wife sleeps willingly with aged boss of husband to give him promotion etc.)

Discussions with God - Prabhu Sung Vartalaap - Hindi We, the commoner, ...