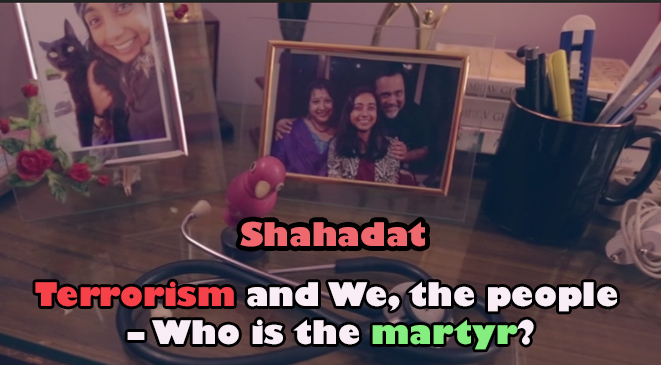 Terrorism and We, the people – Who is the martyr?

Here is a review of a short film available on pickurflick.com – Shahadat.

Shahadat is an urdu word that means martyrdom. A person who died for nation is martyr. Shahadat is baptism of blood.

The film is based on the 2008 Mumbai Attacks.

The 2008 Mumbai attacks (also referred to as 26/11) were a group of terrorist attacks that took place in November 2008, when 10 members of an Islamic terrorist organisation carried out a series of 12 coordinated shooting and bombing attacks lasting four days across Mumbai.

The attacks, which drew widespread global condemnation, began on Wednesday, 26 November and lasted until Saturday, 29 November 2008. 164 people died and 308 were wounded!

The film shows one such victim out of the 164 people who died on that fateful day!


A young girl – only daughter of doting parents – goes to celebrate her farewell party at the Taj Palace Hotel, Mumbai…little did she know that she would actually bid farewell to her life! What was her fault? What was the fault of her parents? Who is sacrificing here and what is being sacrificed?

The short film really makes one wonder about the futility of over thousands of technological advancements that our world deals with today! If such advanced technologies cannot save the life of innocent people – what good is it for anyone then!? On the contrary, such hi-tech progress is utilized more by the terrorists who actually plan blasting around the city with perfect co-ordination – thanks to mobile phones- co-ordination reached an altogether different & higher level of perfection!

And what about us, the commoners?! We will learn to live with fond memories of our good old days? We will also probably thank the invention of cameras – that we could weep looking at the picture of our departed loved ones – all thanks to camera?! What took years of love, caution, care and nurturing…..ended in a matter of few minutes! Who is to be blamed – the careless administration of the nation? Lack of security measures and infrastructure? Or are we to understand and accept that hatred is a much stronger emotion than love- thus terrorists- who are motivated with ‘Hate’ capsules – succeed in killing & terrorizing  people …whereas we, the people, get terrorized and killed because we let ‘Hatred’ grow among us !?


Film leaves the viewer with a very melancholic ending – and makes you think – what if….you were one of those unlucky ones…who had lost their loved-one because some unruly wild animals had planned to arouse fear in the hearts, minds of souls of we, the people!? What is the solution?