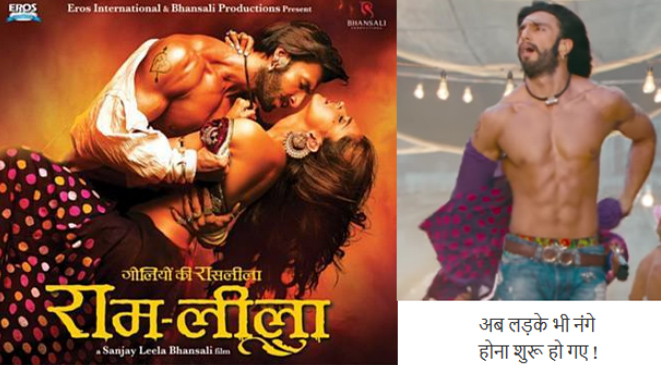 Film Ramleela – released in 2013 – like Satyam Shivam Sundaram – where the director promoted the sexy nude body of ex Ms Asia Zeenat aman – but lured people to the cinema halls naming the film after GOD – similarly the same stunt was tried yet again – in Ramleela!

The character named Rama in this film was a blue film addict and distributor, sleeps around with anyone available in his locality…..blah blah..blah

They could have named the film: ravan leela, kansa-leela, duruyodhana leela – why malign the name of Shri Rama – who Indians worship – where in India people are still dying in the name of Ayodhaya Ram Janma bhoomi issue!!

There is a song in the film tatad-tatad – where people have dressed up like vanars (Hanuman ji ) and blue colored tribals – showing basically the 2 deities that Indians worship daily!! So am I really wrong when I say that Bollywood basically wants to establish Ravana Rajya yet again…and the dullards (we, the people) are completely unaware of it !