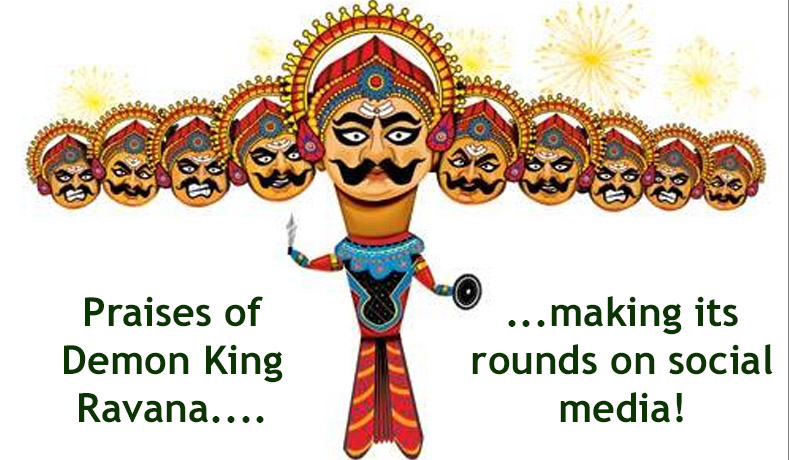 I am amazed to read ‘Praises for Demon King Ravana’ making the rounds on social networks! Things like he was so learned, he was courteous towards Sita mata and was patiently waiting for her consent and all that blah blah!

So what is the big deal about being knowledgeable & learned? He was well read – so? There are many in today’s world who are very well read and very intelligent, they have managed to dupe thousands and run away to foreign lands and are currently sipping chilled beverages and watching dullards scream and shout for having lost their money and employment….
There are highly shrewd males & females with great motivational skills who are capable of motivating and moulding the youth to blow themselves up as human bombs or create ruckus by shooting common people randomly (am sure as Indians you are well aware of what I am talking about)- So what ?

By being rich and affluent and being able to speak confidently and successfully mesmerizing millions to lead a life based on either superstitions/  illusions or gross idiocy  – you become great?!


Then why are the cops behind them? The cops and law & order are making a big mistake in that case! Bring in the terrorists & dupists (those who dupe successfully & smoothly) and make them your king – ask the cops to stop harassing the learned, rich and affluent males (and females too)who believe in  living life king size by just duping couple of thousand citizens – by entertaining them with bikini clad waitresses pouring alcohol into their glasses or by selling them shiny-looking glass pieces in the name of precious stones! Wow…. such intelligent rich & affluent individuals with several sexy sex-maids in different states and at the same time with wife and children too (they value marriage also – double wow)- such great achievers…why on earth is the Law and Order of our country so mean and jealous of these highly successful citizens!?

And now look at us – the Indians! We actually burn the effigy of a learned demon king Ravana…..whereas actually we basically are all followers of Ravana only! It is like burning down your own self!!…..that is really not done I guess! Who would burn one’s own self!?

And as far as ‘waiting for Sita Mata’s consent’ is concerned – well, according to various religious texts, Ravan had a curse upon himself that if he tried to force any woman against her consent, he will be burnt to ashes instantly…..this is basically the reason that Ravana could not touch Sita Ji. Yes, Ravana had many females and sex-maids in his harem….he had their consent you see…that is why he was ‘making merry’ with them all…...why we all know how the population of  ‘Consenting adults’ is increasing on a daily basis…..do you now understand the root of it?


I know it is very difficult to follow the path set by Maryada Purushttam Shri Rama – the epitome of perfection….but that does not mean you start justifying a below average demon BEEP Ravana just because it is very easy to follow his footsteps…..be immersed in wine, women & wealth, be selfish and egoistic and treat men and women (rest of your subjects) like muck!

It is also very easy to follow his sister Surpanakha’s footsteps too – just make yourself available for any male who catches your fancy, attract random males by wearing sexy outfits and dive on bed with them anytime, everytime, anywhere, everywhere….things were going fine in their lives actually – both brother and sister were having a good time BEEPING around……but their encounter with the epitome of chastity and morality …purity and truth…brought about their doom!

So there is nothing great about leading a selfish, corrupt and licentious life – for if your do so, be rest assured, your end is very near.