Who – Meaning the other woman – other than the wife. The film was also released in 1980’s where the wife was simple, sober and decent but the husband gets an option to flirt with a  sexy secretary and he does so by lying about his wife – the fact that she is about to die of cancer! Beans get spilled and the husband has to reluctantly return to his ‘vegetable’ looking wife…who was also a mother of his child!

2019 – same film but with a difference! The wives are no longer sober or decent – at least this is what the film makers think – being surrounded 24/7 with sexy nubile females only too ready to shed off all clothes at the bat of an eye – this is what the Bollywood story writers, directors. Producers and actors can think and write about!

SO they get married and live ‘boringly’ ever after…like wife also takes up a job and since even she has less time, so the quality of lunch box goes down – all that she packs for him is dry sandwich and biscuits!

In comes a sexy client from Delhi and the husband starts drooling! After a lot of showdown, the wife comes back to him and the film gets over for the Indian ‘jahil ganwar’ audience! Wow! Applause.

Although the same supposedly ‘jahil ganwar’ Indian audience also watch Crime patrol and Savdhaan India – where it is clearly shown ‘ Once a sex addict, always a sex addict’ – in real life – both husband and wife would have continued with their sexcapades and lived lustily ever after!

There are some super-intelligent people in our world who believe that if humans -esp. women – are allowed to express their sensuality more openly by wearing sexy-lacy-torn garments and agreeing to have sex with just anyone who catches her fancy – then the world will progress in leaps and bounds!

This recently released film showed exactly this concept – the Patni (wife) boldly proclaimed that she was addicted to sex, she has had sex and gives a damn to the concept of chastity or virginity! The man readily agrees to marry her! Wow! What an achievement….

What happens next is that a sexier female walks in the husband’s life and he wanted to ‘do the needful’ with her….this broke the Patni’s (wife’s) heart and she cries and is depressed and tries to make him jealous and wins back his love/ attention/ slavery? – by hook or by crook! And the sexier female was also heart broken for she thought of him as a good ‘mate-material’ – so what do we find here? 2 hep, educated modern females all heart-broken, depressed, playing games to win a male attention? Where is the progress?

A progressive mind cannot be bogged down by infidelity – they cannot be cry babies – getting drunk and trying to get even with a ‘weak’ personality male! (weak personality because he could not control his lust for a sexy siren) – so where is the progress?

And by the way – the countries where the women are modern – who specially show their modernity by exposing their cleavage/ thighs/ buttocks – whatever –  and get into relationship with random males – those countries have zero crime (esp. rape) rate? Why? Because the women are mostly ‘consenting adults’? 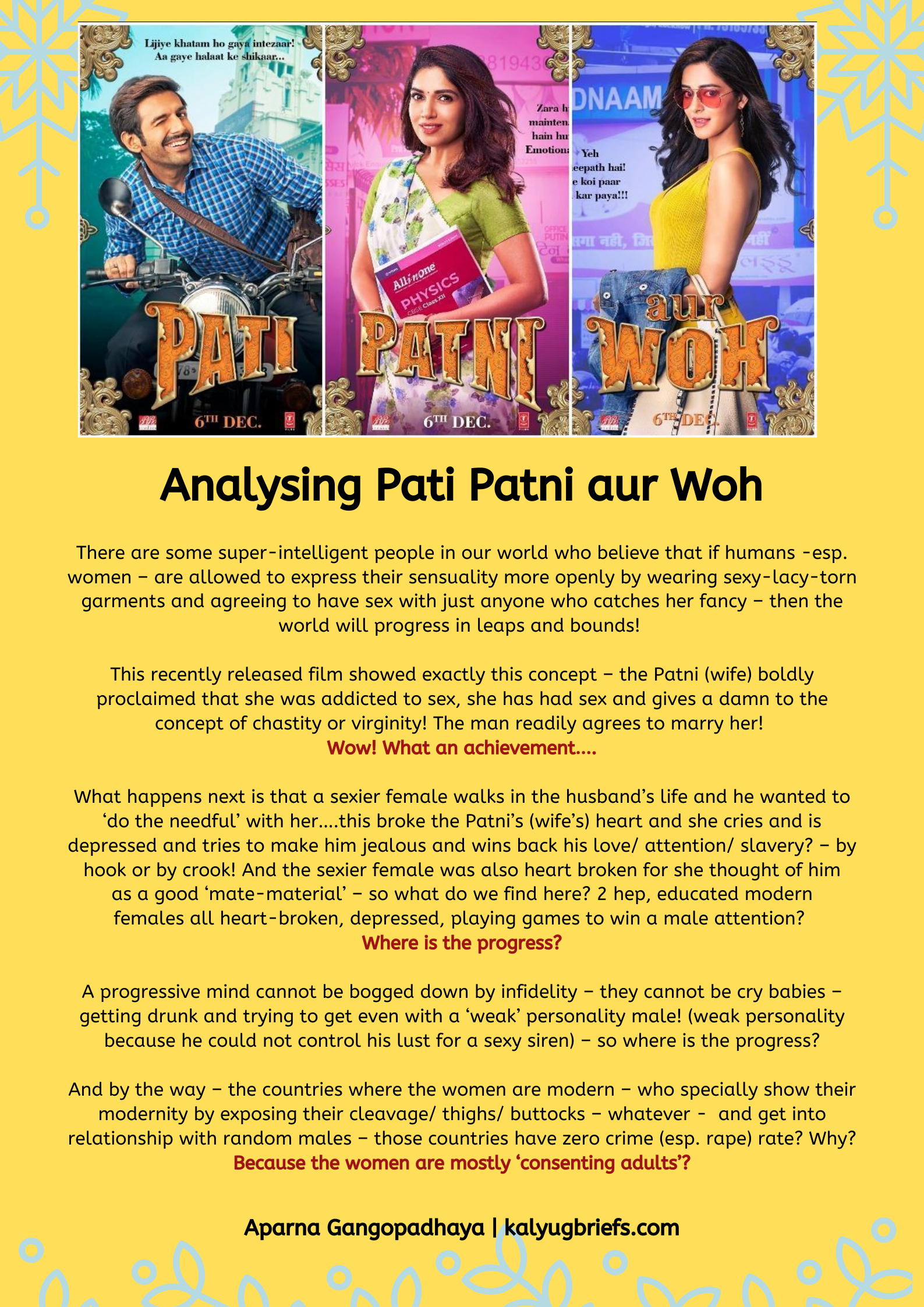