Only You – A Film Review 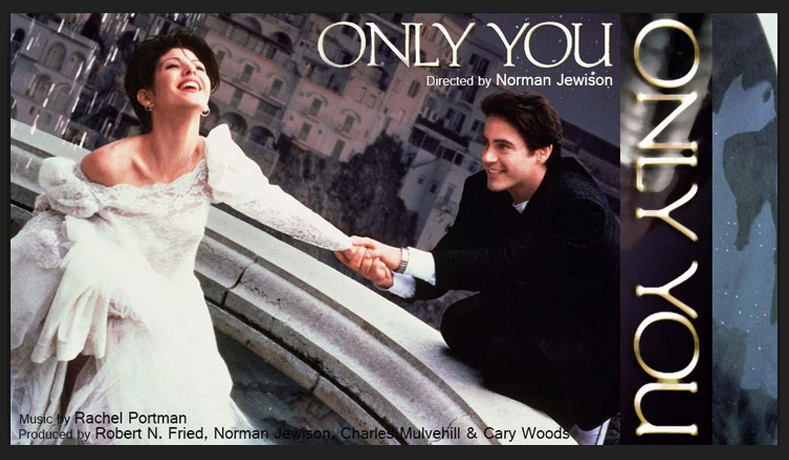 Only You – A Film Review

Oh! Damon Bradley ! The bane of our (womens’) existence.

A young girl of 12-13 years of age ,with her group of friends visit a fair where her brother had naughtily passed a dime to a seer-lady asking her to tell his sister about a dummy name “Damon Bradley” and let her know that this name will play an important role in her life – all this just to prove his point !

The seer lady told her of this name and along with that she also told her that man makes his own destiny .

The girl grows up and is soon going to get married to a doctor. Her brother is already married . Her brother’s wife is not very happy with her marriage as there is a communication gap between the two of them. The heroine is very fond of old romantic movies and watches such mushy movies with full concentration – and day dreams that she will one day find a man of her dreams who will sing and dance with her on the swing, around trees etc – surprisingly this thought process is much like our mushy Hindi (Indian) film heroines.

Coincidentally , while she was trying out her new wedding outfit, someone by the name of Daemon Bradley called up and she thought that God wants her to marry this man only ! – How very innocent these girls are all over the world I must say ! The way the Follywood Directors have marketed such clichéd statements like “Someone is there somewhere waiting for you only…Only you” – etc. – such silly dreams as shown to the girls all over the world is pretty misleading !- The Fairy Tales are to be blamed for such utter dreamy-headedness among girls !

Anyways , with her wedding day just 10 days away , she packs her bags and along with her frustrated sis-in-law runs to find out who the man is – her dream man by the name of Daemon Bradely !! – just to get a glimpse of him !! – She leaves her fiancé in a frenzy to meet with this unknown stranger – showing that she had agreed to marry the well settled Physician just to get an anchor for life who will provide her with food, clothes and shelter !

Anyways , she meets a good looking fellow who had heard that she was looking for a guy called Daemon – on seeing her gullibility , he said that He is the one – so she starts to date him and even kisses him on the mouth ! (although its not all that a big deal for girls abroad to kiss anyone or even everyone they meet…as per Hollywood Movies i.e.) – once while they were about to jump on each other on a bed in some hotel, the fellow (who was actually a shoe maker / designer or something) confesses that his name is not Daemon !

She immediately kicks him off her body and severs relationship with him with immediate effect.


The last scene was in the Airport the name Damon Bradley was called out and both the girl and the fraud (Peter) rush to see the man – and it turns out that he is an older man – not even good to look at – and the fraud sniggers and says to the girl that she is most welcome to accept the one she has been waiting for all her life !!

The girl also realizes that she has been a fool – but at the same time also realizes that the fraud is better looking than her Physician fiancé – so she decides to dump the poor Doctor and run to the liar fraud !! – I wonder how she might have reacted if the Damon Bradley (called out in the Airport) fellow has been young and good looking …better looking than Peter also…..would she have asked him to date her….that remains a mystery folks!!