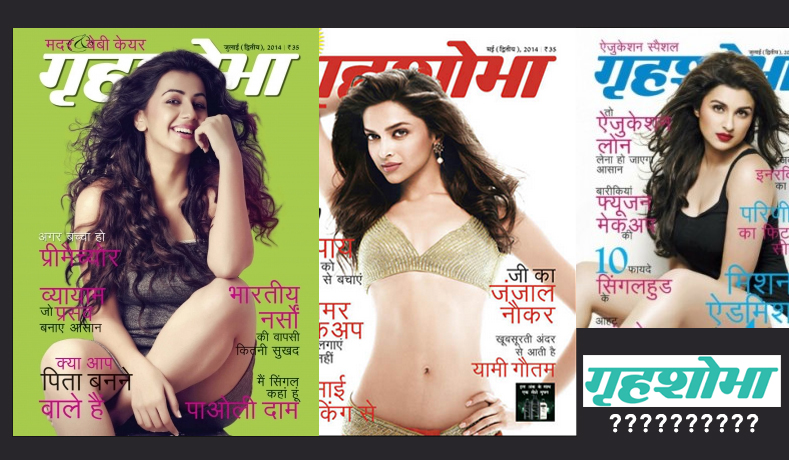 Now have a look at the magazine covers…so one can well understand what must be the content of the magazine! Seriously…are they competing with men’s magazines like Playboy and Debonair!??

If this kind of cheap and derogatory semi-nude image of a woman is used for a magazine that is usually bought and kept in the open at home…then probably even men’s magazine showing their corrupt sex-starved fantasies regarding women are also lying in the open at home…(PS. During the early and even late 80’s such magazines with semi-nude females as top covers were kept hidden from children)

Which also means that children have access to such sleazy content from a very young age…their minds getting filled with dirty images of the opposite sex…and girls getting absolutely hideous ideas about ‘ how to win the love of a man by undressing & posing nude?!’

And when the fantasy world collides with the real world – hell breaks loose…..ending in suicides or living with grudges – frustrated and depressed for life!

It is said– ‘“The mind is everything. What you think you become.” – Buddha

So what are we being made to think by these magazine editors?

That a female body is an object to display for all to see and lust?

That a female should expose herself and be a sex object to one and all – no age, caste, creed, religion bar ?

That it is all that a woman should do – undress and entertain sex-starved, depraved males?!

I suggest that the title of such magazines should be changed – maybe rename it to something like – How to be an ITEM Girl and remain so forever….like – Sexy Item or Sultry Jawani……