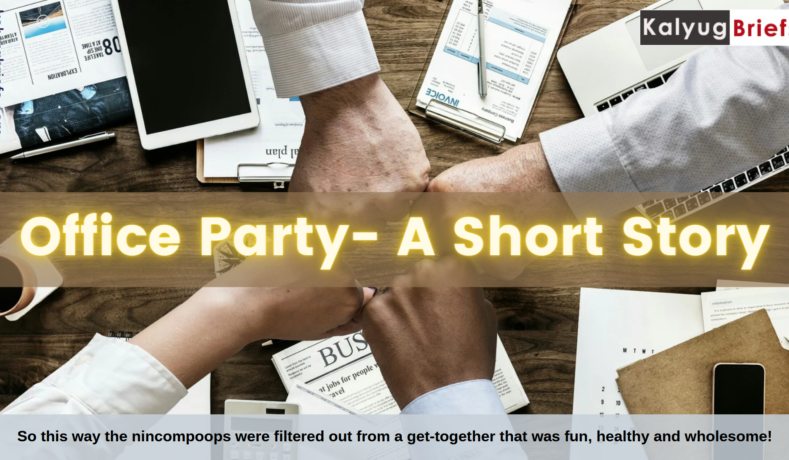 Arpita sat discussing with Priya and Sneha about the forthcoming monthly party that they decided to have on their own and excluding the beepish employees who had proved themselves to be maha-beeps in spite of repeated criticism from others.

Priya – But don’t you think that others will feel bad about it…like if they come to know that we excluded them..

Arpita – How will they come to know – we will get-together on a weekend – or some holiday – we just need not discuss anything about the party.

Priya – Such things get leaked yaar – like we are 7 of us girls – who will surely go – and we have a common Whatsapp group – some may just share the weekend party celebration and everyone will come to know.

Sneha – So fine – big deal! We girls had a party – it was a Ladies Day Out…who can stop that or even feel bad about it? Don’t bother so much about what others feel…..when clearly those very ‘others’ you are so bothered about are the most insensitive shameless beeps!

Arpita – Priya … I understand that if you go, Aniruddha will obviously come to know since you both are pretty close…

Priya – Yeah…so can’t we invite him too? He is a teetotaler you know …so the problems we have been having in going dutch – the greedy alcoholics continue to order beer and vodka and what not and we all return home half-fed !

Sneha – Yes, that is the exact reason why I am not ever going to contribute in any office party – especially when the slum-raised greedy pigs are going to attend the party – 70% of the money goes into paying for alcohol – why the hell should I pay money for that!?

Sneha – When did I ever call names?

Priya – Slum-raised…is kinda judgemental statement….and anyways – the ones you are addressing as slum-raised are all MBAs from eminent institutions…..

Sneha – How does that matter – their mannerisms and behavior is worse than slum dwellers I would say …we have literally insulted them for their insensitive nature…shameless – like beeping beeps – they were continuing to order cocktails – when they knew very well that all of us had contributed for the party and at least 60% of us were not even consuming alcohol – the Accounts Department fellows – they just backed out after the very first party – did you notice that? We should also have boycotted after the first time itself ….. we should have zero tolerance for idiocy – it was a mistake to again go out with them – they beeps repeated their idiocy again and yet again!

Arpita – Yeah – chill Sneha! This is the very reason we are having this discussion today sweetheart! Basically, even if they come to know that we excluded them for their idiocy..how will that matter to us!

Priya – Oh! They can be wicked – they may stop co-operating with us – they are vicious….when they come to know that their chance to have a free flow of alcohol was stopped by us…

Sneha – Don’t be ridiculous! I don’t think they can do that….

Priya – Oh yes! They can…as you yourself mentioned – mannerism like ‘slum-raised’ beeping beeps – they can stoop to any length to take revenge….

Arpita – revenge!? Oof girls….that is too far-fetched! Why can’t we just have a party with people we like to hang around with…with like-minded people – is that so difficult?

Priya – So can we not also invite our friends?

Sneha – You will ask your friend to contribute and hang out with your office colleagues? My boyfriend will not like that at all!

Arpita – You want to invite Aniruddha – okay – do one thing – ask Aniruddha if he is interested to join our party …and also ask him if he can suggest others from this office to attend a lunch party – No Alcohol allowed- please mention this strictly…..can you do that – and please be very discreet about it – I don’t want unnecessary controversy over this small get-together!

Sneha – Yeah – please do mention lunch party at a good restaurant…the beeping beeps were suggesting a nightclub last time that is infamous for bar-dancers! Such audacity they had…..they were demeaning women right in front of us and did they actually think we would go to some such sleazy night-club?

Priya – Yup! That was too much…..when males get drunk – their true colors are so easily revealed…such slum-dweller mentality – so pukish!

So this way the nincompoops were filtered out from a get-together that was fun, healthy and wholesome!