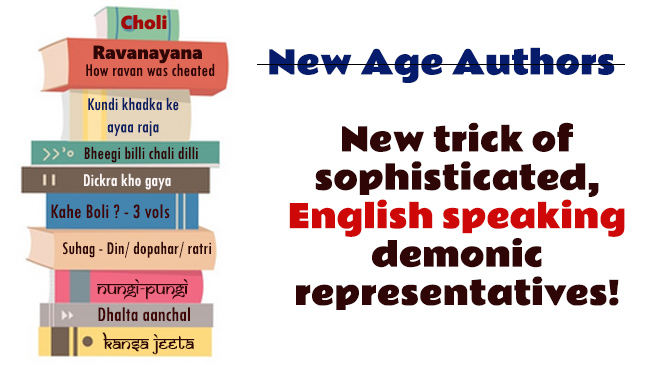 So if you can read and write good English, you have the right to further convolute the already confusing religious epics! Nowadays authors with good English writing skills are adding a lot of spice especially in epics. Being human and being brought up by the environment of ghor kalyug – where depraved cine artists/ directors / producers / authors (porn authors included)/ other artists (good, bad & ugly)  rule the mind, where conniving females undress to give a jiggle show and make money , where – if you are rich – you can get away with any crime by buying off the cops, where political leaders are knowingly involved in rape, terrorism, murder…….. all the good/ noble/ divine messages from our religious texts  kind of douse down in front of the absolutely obscene & vulgar lifestyles that people (majority) like to lead!

Under such circumstances, the new age author begins to write in such a way that the reader (English reading reader )  feels good about his depraved lifestyle & makes the author a ‘Celebrity Author’ – with over 1 million books sold overnight! So this is the new dhanda (business) of the New Age authors – include dialogues according to your own sweet will & turn the epics into pulp fiction ! Bravo!!

Carry on till it lasts folks…..60% of BPL (below poverty line) will never know about you, rest 30% Hindi speaking population will also not know much about you…until of course when some dull-headed depraved film director/ producer watches your success as a ‘Celebrity Author’ and decides to play it safe and make your fiction into film  – then you may have problems – because then the religious people may make some ruckus and cause you trouble. Although even that temporary ruckus can be doused down by the Cine/ entertainment world – throw money at the authorities and they will take care of you/ protect you…after all when and where  else will you utilize heaps and heaps of money  that you all have accumulated by hiring females born to greedy, depraved families – who readily undress to give a jiggle show in public?!