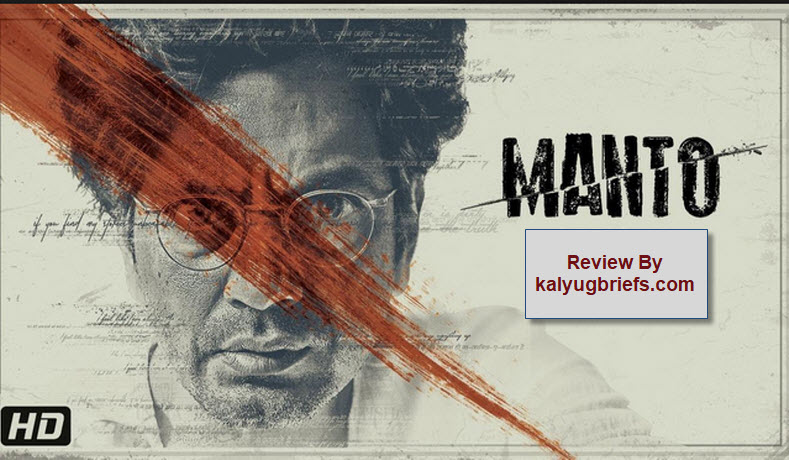 Manto
Based on the true story of a famous pre-independence Urdu author Saadat Hasan Manto. Five of his stories are shown in this film which are as follows:

I am giving the details of each story:

A barely 12 years old girl is getting ready – her mother is helping her get ready and in comes the father hurriedly to take her to Babus waiting in the car. Two old babus and their driver see the young girl and the driver feels that the girl is way too young – but her father confirms that she knows her job well!

They take her to the sea beach and generally play around – later the driver is shown to drop her at her home – he gives her a 10 rupee note but she returns it saying that she did not do anything so why should she take the money!

Basically showing that the driver took pity on the girl – and unlike her own father – he saved her from the 2 aged beeps by getting them totally drunk….or else they may have used the girl for oral sex or sodomy – whatever!

All three in the car were Indians – moneyed Indians who had a car and a driver too! Our poor freedom fighters were dying young on the streets of our motherland and here – at the same time – some Indians had no scruples whatsoever and probably were least bothered about the ‘War of Independence’ that the Indians were struggling with!

Poverty stricken parents sell their own children in the flesh market….but alas – no one till date could eradicate poverty – Hail India, Hail Indians!

A pimp stops a man on the road and asks if he is interested in the services of a prostitute. The man agreed so the pimp goes inside a dilapidated building to wake up a half asleep prostitute. She says that she is too tired and will not work but rather sleep. Hearing this the pimp starts beating her and she too starts hitting him back….killing him accidentally! She sees that he is badly injured – maybe even dead – but goes off to sleep instead!

While the India-Pakistan partition was on – law and order totally went haywire and people began looting each other. There was this Pakistani serial I used to watch on Zindagi Channel (not aired anymore!) – Waqt ne kiya kya hassen sitam – based on a novel – Bano – where it was shown how sikh men were attacking buses going to Pakistan and even murdering the people and taking away their jewellery and clothes! In fact it was also shown how the mother of the Sikh youth was so proud of her son to have looted so much gold etc!

Similarly in this story Manto describes that a Sikh man returns home and his wife wants him to make love to her….but he fails to do so. Enraged, the wife thinks that her husband is having an affair with another woman because of which he was unable to quench her sexual thirst. She threatens to kill him with a sharp knife if he does not tell her the truth….it is only then he tells her that he had barged into a house and murdered some family members – but he saw a very attractive girl so he took her on his shoulders instead – thinking he will devour her first before killing her – but when he lays her on the ground – he found that she was already dead! He was shocked to see that he had been carrying a dead body all the way to enjoy her…..


So basically we do not need outsiders to destroy us…..our own people are sufficient to kill and finish everything! Imagine what kind of people we co-exist with – when there was peace, these very people must have met and enjoyed togetherness but just as soon as there was unrest and ruckus….everyone wnated to loot, kill, rape, murder!! Similar thing has been shown in 1947, Earth (starring Aamir Khan and Nandita Dutta).

Reactions of a raped victim

A father is searching for his lost teenage daughter in a refugee camp and is running helter skelter to find her whereabouts….people are even seen making fun of the poor old man. He reaches a room where patients are lying and happens to see his daughter lying on one of the beds. There was a window near the bed so the doctor asks the father to open the window…while the half dead girl heard the words ‘open it’ she unconsciously started opening her salwar…..meaning she had reached some such place where she was constantly raped – multiple times by many men!! Similar thing has also been shown in ‘Begum Jaan’ (starring Vidya Balan) and its Bengali version too – starring Rituparna.

Story narrates that post independence, the lunatics of respective countries will be reached to their own lands. …but there is still a lot of confusion as to which place belongs where…so the aged mad man dies on the Noman’s land.

He did not believe in sugar coating anything – he presented things as is. He even said to one of his friends that when he sees sleazy drunk males entering the Red Light Areas – he cannot paint a rosy picture of the gory incidents that took place there!

During the partition, he had to leave Bombay and return to Pakistan where his blunt acidic writing style was not appreciated and accepted. He even had to face a trial for ‘Cold Meat’ ! Although he loved his wife and daughters but he could not handle failure and took to heavy drinking…that ruined him all the more!

An Indian director is checking out females – how much they can expose and eventually he chose the fair and bold one who had taken off her dress in a jiffy…unlike the dark one who was hesitating in taking off her clothes!! …and now we have several fairness creams sold in the market…girls and even boys dying to become fair…for what? To get selected to shed your dress in front of the camera!?


Struggle for freedom or independence did not make much of a difference to rich and famous people – they continued to live lavishly ever after….in a scene yesteryear actor Ashok Kumar was in the car with Manto when some mobs stopped the car…but up on seeing famous actor Ashok Kumar, they let them go! So basically the rich and the affluent people – who were happily serving the Britishers and even emulating their lifestyles – eg. females wearing plunging necklines, consuming alcohol etc. – did not feel any difference pre- or post independence…..life remained the same for them….night parties, bathing in alcohol, cabaret dance, prostitution…..everything continued as it was!

What is the use of so many deaths and struggle?!