Maladies of the Middle Class – Why You Not Married? 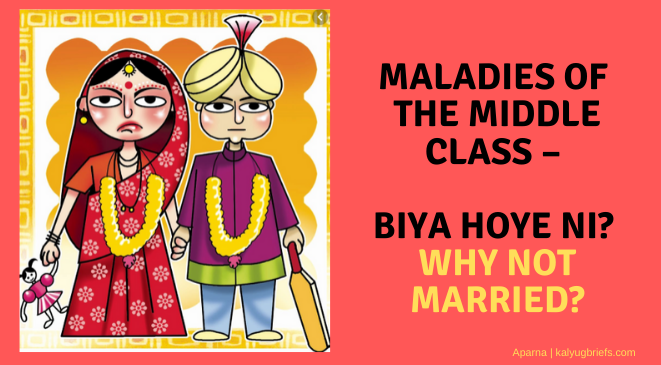 Maladies of the Middle Class – Why You Not Married?

The most dreaded query among the middle class…. for those who are single — Why are you not married!? Here is my story and conclusion!

I did not get married for number of reasons:

I got spiritually inclined at a young age – I was around 22 when I read about Kundalini Shakti (divine serpent energy at the base of our spine) that needs to be awakened by a Sadhguru for manifesting one’s own divinity. Since I was quite a God-lover since childhood, the fact that divinity can be manifested by human beings was a very novel proposition ! Thus started my seeking for a SadhGuru!

Obviously when ‘Spirituality’ became a priority for me so a ‘spiritually inclined’ man would make an ideal life partner for me. Way back in the early 90’s when I was in my 20’s – we did not have Internet – where my search for some ideal life partner might have become successful had I joined relevant ‘Discussion Forums’ etc. Well – it is still not easy as many simple women I know are finding it rather difficult to find an ideal mate in spite of over thousand Dating and marriage sites/portals!

Moreover since I was just a plain Graduate (Zoology Hons.) from Calcutta University, I worked in small time private companies – where the chances of meeting someone impressive was highly unlikely! Please remember that I was born and brought up in the Army environment – so obviously I had actually seen/met/interacted with handsome, suave, courteous boys/men all my life – till 18 years at least – unlike others who had probably just seen impressive men either on silver screen or maybe read about them in Fairy Tale books or novels/ chick-lits!

Then happened the ‘Great Love Illusion’ of my life! I fell in LOGIC with a devotee of Maa Kali – who, I was given to understand in my dreams/ visions/ uncanny happenings and even verbally-told-to-me by another lady who used to hold Satsungs at her house, was none other than the re-incarnation of Thakur Ramakrishna! Thus formed a logic on my mind – He has found God, I have found him, therefore I will also find God – Hence Proved! This maha-illusion of my life stayed for 7 years (yea – the 7 year itch) where I happily let go the years of my prime youth ! In those 7 years, I cumulatively met him for less than 7 hours I think…and we had no mobiles then…and he had no Landline in his house – he was financially weak actually – just had a small temple where he had himself made the idol of Maa Kali and worshipped her!

As you age, you become less adjusting! Same with me folks – as I aged, I saw no reason to tolerate someone’s idiosyncrasies …and vice versa of course – why should anyone tolerate my uniqueness as well? My seeking for an ideal life partner diminished with time and with the coming of Sahaja Yoga in my life – the Marriage desire got completely extinguished!!

So ladies…and gentlemen too – but especially ladies – because women (daughters) are more pressurized to get married and settle down with just anyone…sometimes even against their wishes – you can live alone with comfortable financial independence – invest wisely, secure your old age financially and you can live in solitude happily ever after ! It is not mandatory to tie the nuptial knot and suffer endlessly with some below average/ mediocre life partner who cannot even earn your respect – leave alone love! But remember not to cause trouble to couples who are married and are trying to raise their children in a healthy environment! As long as you are not promiscuous and don’t make yourself available to married men/ women – no one will bother you! But if sex is very important for you then you better get married and settle down. Please don’t break anyone’s love-nest or be infamous as some escort of se* worker or a wh*re monger if you are a male! Society at large does not tolerate promiscuous lifestyles.