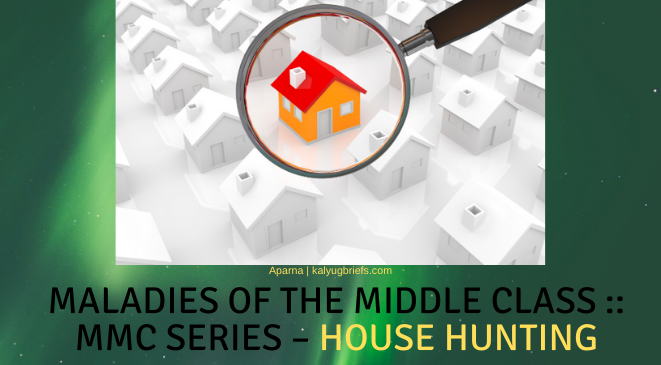 After both my parents left for their heavenly abode, I shifted to my sister’s residence as my house was too big to be maintained by a single person! I mean why would I live in a huge house all alone!? No point in maintaining such a huge house and be fleeced left, right and centre by the domestic helpers! Even while both my parents were alive, the domestic helpers used to happily indulge in small time hera-pheri (thefts) like taking away ginger, garlic, onion…to horlicks, sugar, tea-leaves, rice grains…even vegetables – oil, detergent powder….yea – we knew they were taking but honestly speaking we were helpless – with mom becoming bed-ridden, the kitchen was under their kabza (capture) – neither me nor my father could keep a strict vigilance on what was going on in the kitchen! We knew the ration was finishing pretty fast but the domestic helpers were indispensable and we could not be too strict with them! Thus petty thefts were purposely being ignored with a self counselling statement as ‘ the poor and down trodden people are able to eat some good food because of us…so let them have’! This is how, we, the people, the commoners, counsel ourselves and ignore petty thefts of ‘poverty stricken -living in the slums under most deplorable conditions’ people!

So you see folks, if I continued living in my double storey building sprawled over 3600 sq.ft, I would have had to keep 2 or 3 domestic helpers – gardener, brooming & mopping plus utensils washer, cook etc. I would have had to pay them plus maintenance charges etc…where is the money!? I was unemployed – just did some small time freelancing. I had left my full time job in 2006 (I was anyway just making Rs.6k as a full time worker)– around the time my mom fell for the first time and broke her ankle…and anyway – even if I had managed to keep domestic helpers, who would keep a tab on them – I knew very well that they would now fleece me even more because they know how indispensable they are …and also they knew about my nature – I am not the kinds to loiter around them – I am too bindass, my purse lie open – I just exist like one trusting lamb….wrong way to exist in Ghor kalyug – given the nature and greed of the poverty stricken class…but then even I could not change my trusting nature! So best was to shift base!

Anyway, so I shifted base, kept my house under lock and keys (with the intention to sell it and buy a small house near my sister’s house) and lived with her. But of course not to live forever at her in-law’s house – so after around 2 years I started looking for a suitable house – 1BHK – near her locality so that I could be closer to her house. And then I came to know how ‘Single’ men and women at looked at…looked down at?….. by the commoners!!

Couple of brokers – local brokers were contacted and they gave me time to show around some available houses.

I followed them in the car. Most of the times, frail aged men would come out, look at me and the first question asked was:

Qs. What is your husband doing?

Him: (literally screaming at the broker) how many times I have told you not to bring single people to my house – I will not allow ‘single’ status ! – and would just bang the door behind!

At other times, the man or lady of the house would show me around and seem positive. I have also liked couple of houses but when, the next day, I am all ready to go with the cheque book, the broker wouldn’t turn up and the house owner would not pick up the phone!

Very rarely did I like a house – compared to several others that were – dirty, unkempt, with dog’s poop lying right in front of the entrance, reeking of urine, broken and dilapidated, breaking walls and cobwebs all over – but then at the last moment they would cancel it..the reasons::

Because we are single – so almost everyday we can call over our friends for booze parties and create ruckus in the locality!

Usually such Single apartments become a F*ck pad for promiscuous or flirtatious males and females – which meant arrival of nasty sex starved people in the locality – thereby maligning the environment! Meaning others in the locality – eg. Teenage sons and daughters will get ideas of living a flamboyant reckless life if they see ‘single’ people leading immoral life and having fun, sex with anyone who catches your fancy – as shown in films and esp. Foreign TV Sitcoms!!

Live-in may begin at a later date!- If the person is Single by status, then there is a possibility that they will bring in live-in partners and change such partners every month…or if with a voracious sex drive – every week!

Such are the myths/ facts regarding those with a ‘Single’ status!

And because there are people who do indulge in late night booze parties, being loud, have reckless sex…..others, who are not even remotely interested in any of the things stated above i.e. booze, sex,party etc…..have to bear the brunt of it!