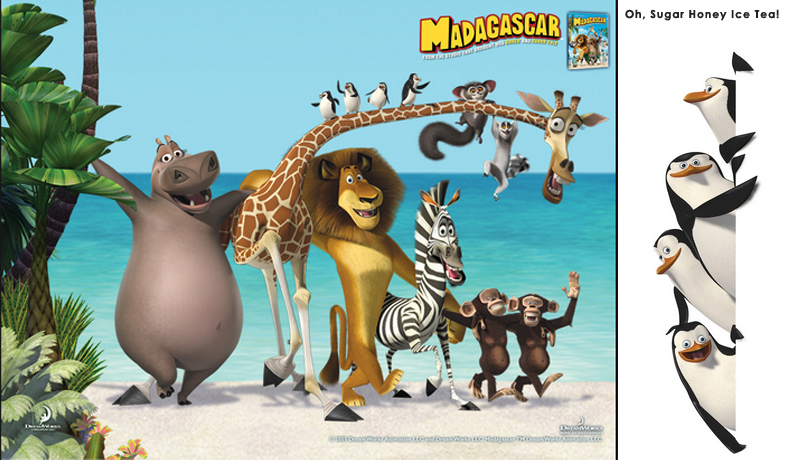 An excellent depiction of what the human beings think of Freedom and Independence !

Alex, a zoo lion, enjoys his cushy life – he loves the kind of attention he enjoys from the people who come to visit the zoo, the way the human care takers take care of his needs , blow drying his hair etc. much like a film actor – enjoying the attention of one and all – without having to work much !

Gloria – the hippotamus – like any film actress – showing her swimming skills and people were shown falling all over her like pin and needles in order to take her pout-lipped pictures.
There were other characters – just like we have comedians and support actors in films – zebra Marty and giraffe Melman – and all the four of them were very fast friends.

In the mean time there were the penguins who were looking for Freedom and independence – the vast lands – all belonging to them – with no one to dance and sing for – as they thought themselves to be more intelligent than anyone – and thought of escaping to free lands which belonged to them only – much like the Creative Directors – who think that they are doing and thinking absolutely right and their plans can never fail !

Marty – the zebra – who always had a mind for freedom – accidentally comes across the penguins and they tell him that what he is just thinking – they are already planning to do so – escape from the zoo – towards independence !

Marty wishes that he would love to be free as well – and tells his friends about his wish to escape the zoo and live happily ever after – Free.

This comes to his friends as a rude shock and they try to counsel him out of such a nightmarish thought and told him of the hardships of living away from civilization – esp. when they have developed this habit of staying in such utter luxury !

Anyways Marty escapes and they all land up in a huge ship to be taken away to another land ! They were still optimistic – thinking some other people will surely keep them in their zoo and life will still be normal – but they land up in a forest island mostly occupied by lemurs !

In the meantime, the penguins take over the ship and reach Antarctica and realize that “The place sucks”- they try to go back to civilization but even they land up in the same island as the others.

In the meantime – Alex – hungry and weary sees his prey in anyone and everyone he saw – reality is very bitter for all of them – they understand the necessity of civilization and team work – the lemurs join hands with them and make Alex their protector – they all start living together as a team in the secluded Island – happily ever after ! – and make a new civilization out of themselves !...

Again they will start from a scratch…hunting….making shelter…the way the early men did!

My fav. Scene : Lemurs singing ‘we like to move it move it’….