It is but obvious for the youth to question their parents, neighbours, locality and even country – why they are unable to ‘live-in’ like so many others in our country and in other well developed- 1st world – countries ! The film deals with this ‘Mudda’…. 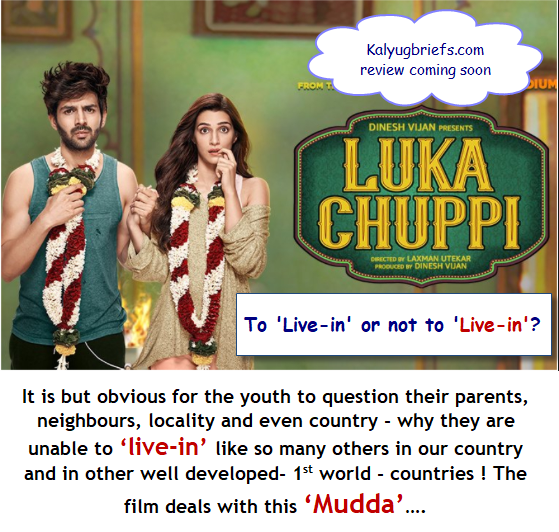 A girl originating from a small town of Mathura, goes to Delhi for higher studies. In Delhi, she falls for a guy who probably ditches her – whether after using her physically, mentally, emotionally or just by mixing with her superficially – is not dealt in detail in the film. We are just given the indication that she had a boyfriend. Now keeping the much advanced & ultra modern Delhiets on mind, it is quite possible that she probably went ‘many extra miles’ with him! But anyway let’s not discuss that here in the film review….for if we had been shown the minute details of her relationship with her ex-boyfriend, the film would have taken a different turn altogether!

So she comes back to her parents in Mathura and wants to do a 1 month internship in journalism from a small publication house at Mathura.

Her father is a politician and the USP of his party is – To Revive Indian Culture – which meant that boys and girls should not hang around before marriage and whenever they saw a couple in some park or coffee house, the party people used to blacken their faces with ink etc. and insulted them! Phew! Little did they know that their master’s own daughter was having an affair in Delhi…and was ditched too!

So this girl (Heroine) meets the boy (Hero) and in couple of days they fall in love! Just in matter of days mind you – remember she had come for the internship for just one month, so that means after meeting him 3-4 times, she falls for him and even he falls for her.

When he proposes her for marriage, she says that her first love affair was a failure and she can’t take any chances the second time – so she suggests that they should Live-in first, fu*k and all and then decide whether to marry or not. Meaning also that if the guy fails to satisfy her on bed, she keeps the right to reject him and vice versa of course – he can also reject her after sleeping with her! Wow…what an idea sirji(s)!! Of course this was not said so blatantly in the film but this is what is usually understood by majority of Indians.

So they decide to go to Gwalior for 20 days for a shooting purpose. They rent a small house in a chawl (community living arrangement for lower middle class people) and play husband-wife for couple of days. Some neighbours doubt that they are unmarried – so they hurriedly photoshop pictures of their pseudo-marriage and save their skin!

In the meantime, an unmarried middle aged male member of the Hero’s family comes to Gwalior with a ‘Desperate housewife’ type of female who readily agrees to go around and have sex with males who show even a wee bit of interest in them. He was actually the brother-in-law (BIL hereinafter) of the Hero’s elder brother. Upon seeing the Hero necking and pecking the heroine in the open, with the heroine even wearing sindoor etc, the BIL thinks that she is also some ‘desperate housewife’ who is available to one and all. So in order to ‘sleep’ with her he follows them and when he is about to make the ‘indecent proposal’ he sees the photoshoped pictures of their wedding!

Beans are spilled and the entire family thinks that they got married without telling anyone! Somehow the girl’s father agrees – since both the families were Brahmins and hurriedly everything was settled in both the families.

After all this ruckus, after living-in, fu*king about – all in a month’s time by the way – she fell in love, decided to live-in like married couples – everything in a single month – then suddenly the ‘Bhartiya sanskriti’ in her got aroused!

Rest of the film showed some more mockery in the name of marriage – like putting on the marriage mantras on smart phone – and tying the nara with the night dress of the female…awww – so innocent and cultured! Wow!

Eventually they reach a community wedding hall and get married. All’s well that ends well!

Young boys and girls cannot meet & hang around – but middle aged sleazy pigs can go around with ‘desperate housewives’!

As young girls, you cannot talk to boys, but after getting the marriage license, she can make herself available to any male she likes!

The political parties in India just want votes –they don’t really care about values or culture. They can happily twist their agendas as long as the mediocre people are ready to give votes! The prime agenda is to keep people mediocre or below average – the more character less they are, the better it is for everyone!