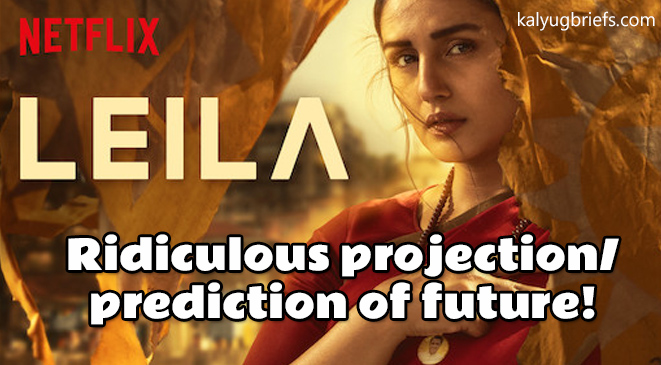 I watched Season I of Leila – a Netflix serial which showed the possible state of our country India after 100 years of Independence – i.e. 2047!

Gosh! Never seen such a regressive piece of sh*t ! and people call me regressive! Ridiculous!

Couple of things that were shown are are follows:

The rich will get to live in plush condominiums . And the poor will live like worms desiring their death at each breath!

And who will be those ‘rich’ people ? – those who are now poor, illiterate and living in the slums!

In the film it is shown that a domestic helper of Shalini (Huma Qureshi) later goes on to become a filthy rich lady who is throwing kitty parties at home – inviting who? Of course her other slum dweller friends who probably lived as her neighbours previously! And the twist of fate….no twist brought about by those having  ‘political power’  – is such that Shalini becomes the maid servant to her ex-maid! Ridiculous !

That educated women – esp. who could speak in English – would have to go through a torturous life and made to feel like ‘women are born to be only maid servants to men!’ – Highly outrageous!

Some stupid apps will be made that will take ‘purification tests’ of women! Any woma who marries outside her caste/ religion will be punished, her kid snatched away from her because he/ she is a mixed blood!….later of course such mixed blood are sold in the market! Oof! Too mucking fuch !

All forms of ART will be discarded as ‘Art is fart’ – a dialogue heard in the film made by some aged politician ! He also mentions that because of absence of ‘dirty dancing/ prancing’ of females as shown in films – the crime rate has minimized and reached to ZERO! – hmmm…well a wee bit of truth in it though…but then NOT ALL FORMS OF ART PROMOTE IMMORAL VALUES – sheer-ly absurd!

Anyway, the film is very disturbing indeed – the way the illiterates are shown to have reached the top and doing potty on our heads……preposterous! Isn’t it?