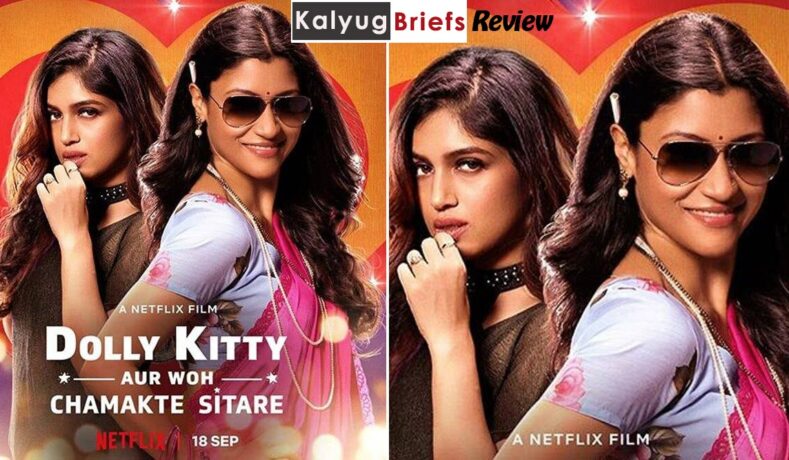 Dolly is married and lives in Greater Noida with her husband and 2 children – both boys. She works in a private office and steals money from there because she wants to purchase a flat and basically show off to people how well off she is!  Although a mother of 2 kids, her husband has lost all interest in her – especially the sex part is missing from their lives – because her husband has found a new way of entertaining himself sexually – via sex-chats. Wife (Dolly) is completely unaware of this perversion in husband. Kitty, Dolly’s cousin sister from a backward area (she herself mentions it) of Bihar joins her in order to find a job and be independent. She realizes that Dolly’s husband was trying to flirt with her so she leaves her house. She was working in a shoe-making company but the manager was rather rude with the employees so she leaves the company – and starts looking for a job.


Kitty falls in love with a pervert sex chatter and even decides to meet him – she meets him and fornicates with him too – only to find later that he was already married and a father of a kid too !! aww….so sad – but she had no regrets though – why? Because although she had fallen in love with him but he was not an able performer on bed – he failed to give her the ‘reason of human existence’ – climax!!

So she then approaches a DJ – the boyfriend of one of her close friends and has sex with him – guess what?! Yipeee- he satisfies her successfully! Gosh! Freedom & satisfaction achieved – reason of birth fulfilled! A round of applause here please!

Dolly watches her cousin having fun in her area!! She gets kinda jealous and purchases filmsy-lacy torn fashion dresses to show off – she even wears them to office – much to the surprise of her colleagues! Then she starts having an affair with the pizza delivery boy…and guess what folks – another good news – yippee – after 12 years of marriage and 2 kids, she got her climax with the pizza delivery boy – something that her husband had failed to give her!

Wow! All’s well that ends well – no no – not so soon folks! In a fair (Mela) ground – an aged lady tries to explain the viewpoint of a vagina (probably inspired by vagina monologues or whatever) – So what do we see here ? A clay/ cardboard model of a huge vagina and the aged lady starts explaining what it is all about! But local political representatives come and destroy all the nonsense going on in the name of modernity. While this was happening – the pizza delivery boy dies!! Aww – no more sex for Dolly….at least not until she finds another ‘climax’ giver!

Dolly then goes home and decides to separate from her husband – along with her 2 children! The elder boy does not understand why they were separating – oh! No – Indians are not all that bold as yet that they will tell their children about fornication and climax etc – the boy feels bad for leaving his father – in fact the boy had seen is mother fornicating with the pizza delivery boy and probably – when he grows up – he will blame his mother for leaving his father for horny sex with delivery boys/ gatemen/ liftmen/ driver – whoever can take care of her ‘climaxic ecstasy’!


Such are the boys who actually grow up to be wife-beaters/ rapists because the mother figure has not been too good for him (refer film Agni Sakshi – where Nana Pathekar mentions to his wife that his mother had left them that’s why he used to beat her up and keep her like a slave…blah blah) and also most Crime Patrol/ Savdhaan India episodes show that broken families mostly give rise to criminal tendencies…..

Dolly’s younger son turned out to be a gay – she was summoned by the school authorities and the principal warned her that she will have to rusticate her son as he insists on going to girls’ toilet etc. Dolly was disturbed with his gay tendencies but later – when she sees that even her priorities were based on ‘sex’ and sexual preferences –  so she gladly accepts her son – like she accepted the fact that her son will be sodomized or will be expected to perform sodomy when he grows up – and she found it to be perfectly alright.

Anyways, in the end Kitty approaches her bosses of the Sex Chat office and says that she will stand by them and that she had a great idea – what what – asked the rich, affluent and highly educated – probably even educated from abroad – Executives (all males – lol) and then she made the greatest revelation – probably greater than all revelations made by all saints and seers all over the world together…..she said : Just like we have females hired for sex-chat for the pervert males, similarly we should have males hired to sex-chat with pervert females – which would also mean – prostitutes for males and gigolos for females!! Although this was nothing new…but the executives were massively impressed with the revelation and so were the media people who were hovering over her to make more such unheard of (heard many times over actually) revelations!


Conclusion – the best-est occupation of a female is to be a sex-worker – either physically or virtually…or both! This way she can change sex partners and find out who is successfully performing on bed….BUT…yes, there is a BUT factor here folks – there is no guarantee that the male who knows the art of performing well on bed – will like to stick to a single female for entire life – he will also – obviously – kick her butt as soon as he comes across a more sexy, sultry, younger female……so this way life will go on…only thing is if only these BEEPING Beeps are somehow marketed the fact that they should not give birth to children as they will lose their figure and their vaginas will loosen blah blah – they will at least not bring forth ‘sad and confused children from broken families’ and make this world a little hell for those who lead a sober, decent and balanced life!