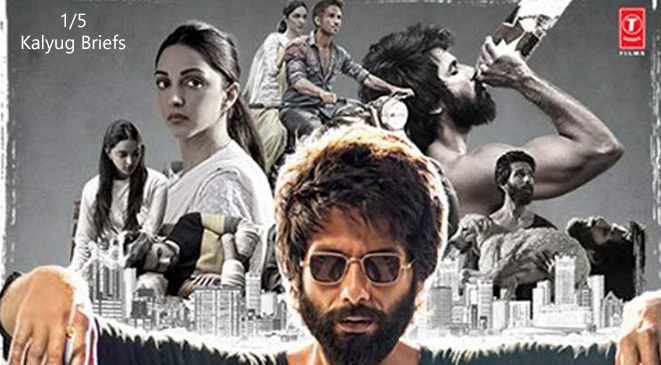 Warning to we, the people – Take good care of your health – otherwise you may reach some manic, alcoholic, drug addict doctor who can kill you in no time!

So this Kabir Singh is a final year medical student. They are seen playing football with another Medical college students – and they call names at each other and start to fight like worse than basti bred illiterate thugs! Imagine – both sides were ‘future doctors’ – OMG!
Conclusion:: if such is actually the behaviour of doctors then we should really be not surprised when we come to know that doctors are heavily involved into ‘Organ Harvesting’ or recommending expensive medicines to patients and force them to get their tests done from particular clinic…because they have their share in it!

After all they behaved no less than the ‘basti bred’ poor labour class citizens who have to fight to earn a square meal – so they are obviously uncouth, obnoxious and ill-mannered…and being rich or well-off adds to their qualities –  self-centred, selfish, egoistic blokes!

In comes a very petty 19 years old girl who joins 1st year. Kabir is enamoured by this pretty face and walks in and out of the lecture class at his own free will! Takes her out and makes her miss lectures…and the dumb bimbo also follows – since everyone was afraid of Kabir! – why? Because he was the topper ! wow! So if you are a topper you can behave like a wild animal ? Ridiculous!

And this girl happens to bruise herself so he brings her to the boy’s hostel – much against the rules of the hostel and the warden was dumbfounded! – so kabir was fu*king the female inside hostel premises – but no one had the guts to say a thing! Later they shift to an apartment – the girl too shifted (to eff happily till it lasts) – did not tell her parents – nor were they bothered to ask …or even if they asked – she probably lied saying that she is in the hostel…blah blah blah!

Conclusion – Kabir, being the topper, changed the boy’s hostel into a brothel where young educated Medical college girl students were the sex-workers! Wow – a big round of applause here please – how modern are our girls of today – they happily eff around – anytime, every time!

A major misunderstanding happens – and Kabir had to part ways with the girl:

As soon as Kabir lost his lady love – he started taking drugs, alcohol and – hang on – best is yet to come….he started ‘banging’ just any random female who came his way!! Awww..mard admi after all – he needs sex when he is drunk and under the spell of drugs!!

Conclusion: What is the guarantee that kabir was a virgin before he started ‘banging’ the 1st year girl student? No guarantee – meaning someone who becomes so reckless and starts having sex with any damn available female – also means that it was not the 1st time (as they tried to show in the film awww…) that he convinced a dumb bimbo to agree to sleep with him! Gosh ! such effing immoral creeps – and these are the kind of males who eventually become acclaimed doctors! ?

Lastly, he confesses that he was drugged while operating and his medical license was taken away for 5 years…..and at the same time his lady love comes back to his life ! awww… pregnant with his baby – awwww…..when he took the full pregnant girlfriend home – his brother looked at him scornfully ….so he quickly confessed – My sperm, my sperm – so everything was fine – all’s well that ends well! Awww…

I was amazed how people found all his abusive words so funny and they were laughing at his monkey tricks…….

Lastly – a ragging scene – senior girls were asking the junior girls to strip! Why the hell!? What kind of demonic culture are we nurturing?!Why should girls strip? how will it make them any better? how stupid is this ragging culture!

sing a song, recite some poem, act like your favorite actress – all this is light ragging – we have done it too….but what is this nonsense about stripping!? 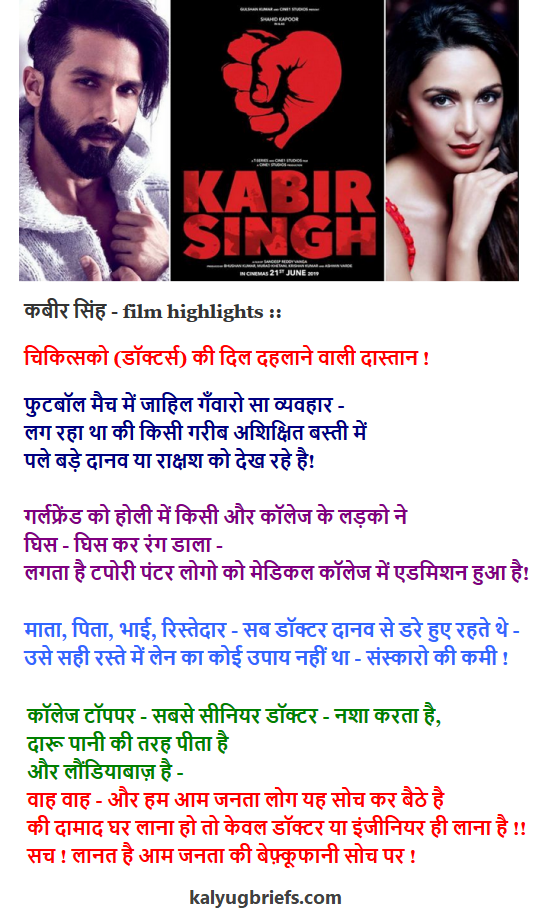 Kabir Singh should not have been conferred with a medical degree in the first place!

He was obnoxious, rude and unruly even while he was a student in the medical college.

He was suspended from college for misdemeanour and when the professor asked him for an apology letter – he denied it and accepted his suspension letter! How dumb & egoistic!

He then took an instant liking for a 1st year student & started telling around (threatening rather) in the college that she belonged to him and started stalking her like some uncouth basti (slum area) loafer!

He then turned the boy’s hostel into a brothel – hanging the female undies shamelessly in his hotel balcony!

All this was quietly (darr-pok-ly?- out of fear?) accepted by the college and hostel authorities! ? Ridiculous! Something is terribly wrong with our college and education system! 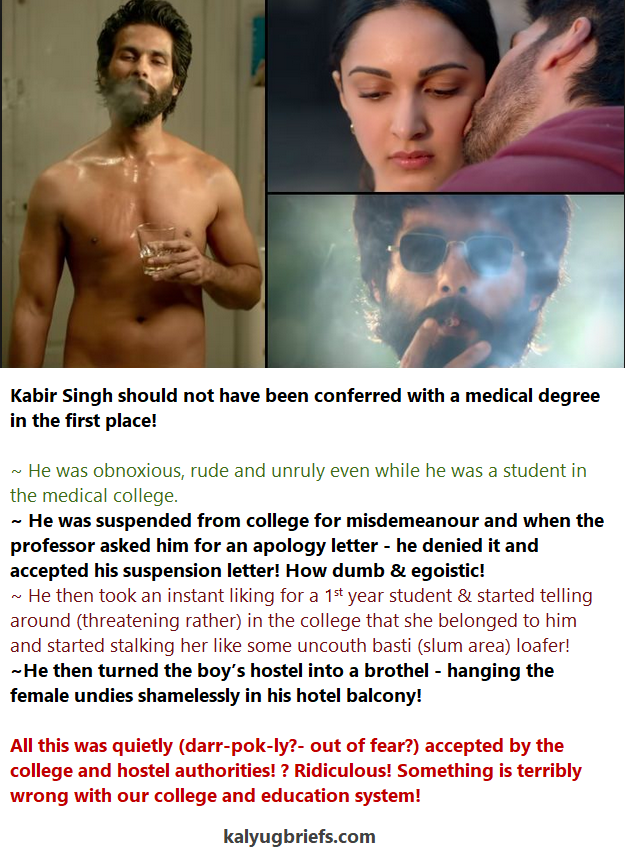