Do you justify Priety Zinta’s decision in film Kya Kehena? 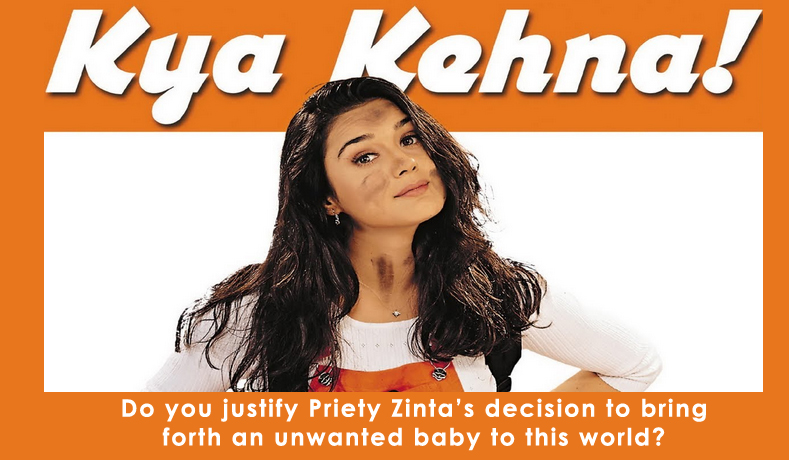 How many of you out there justify Priety Zinta’s decision in film Kya Kehena, to keep the child she conceived before wedlock and from a man who was not ready to take her responsibility?

So this female character played by Preity Zinta was –

A blunt and straight forward girl who did not believe in mincing her words! Eg. The Principal of her school was molesting girls and she blurted this out in the assembly hall in front of all the students and teachers!- well …so far so good.

She meets a flirtations, womanizer rich brat (Saif)….and decides to BEEP with him!! She is warned by friends, brothers and even father that she should not mix with the cheap womanizer male. She turns a deaf ear and Saif manages to impregnate her – under a tree..in the college premises – like they did the ‘needful’ in the open!!! Parents are shocked but nevertheless accept her (trash of your own waste-bin… gotta dispose yourself – right?_). They ask her to abort the unwanted pregnancy.

Before asking her to abort – her father approaches the rich family fellow – Saif’s mother to be precise -and she insults & humiliates him to the core! She even suggests that poverty stricken people (although they were pretty well-to-do ) purposely send their young daughters to rope in innocent rich guys and force them to marry under the pretext of pregnancy!(deep sigh)

So after all this utter humiliation and insult – Priety’s parents decide that the best option for her was to get aborted.

Well folks – now begins the Bollywood director’s mind game….he puts up a calendar of Baby Krishna in Priety’s room and makes the world believe that if she aborts the child – she’ll be aborting God!!!

So suddenly she becomes God fearing and absolutely religious?!! Wow! What convenience religion is that! No wonder why Hindus and Hinduism is so belittled world wide!! In which religious text is it written that you should go ahead and proliferate as soon as you come of age? In Mahabharata, when Kunti conceived Karna before wedlock, she had to do away with the infant before the civilized world outside came to know about it – even in the rampantly polygamous society, a child before wedlock was considered a taboo!

The very concept of marriage was to develop a sense of responsibility among human beings – both father and mother were responsible for the proper upbringing of the child – thereby guaranteeing a healthy society. In absence of marriage – our world would just have been a huge red light area. Period!!

Anyways – in order to end the film, in comes a loser kind of guy – Chandrachur – who agrees to marry her along with the bast*rd’s baby! Really? They lived in the same city – the entire locality and school knew about the ‘garden affair’ and they expected that the child will grow and happily play around?! Are we not already aware of society’s ways and norms? There would be sadistic people around who would tell the child about his actual father and step father – more complications……so? What kind of a stupid concept was Bollywood trying to implant in the already nit-witted Indian brain?

Qs. So why does Bollywood introduce such crap ideas in the gullible young minds?

Ans. So that they don’t have any dearth of broken souls who would readily accept the role of an EXTRA and dance in the background all his/her life!..and we know what extra work loads they are given behind the big screen……