In the matters of the heart, looks don’t matter! DDLJ Revisited! 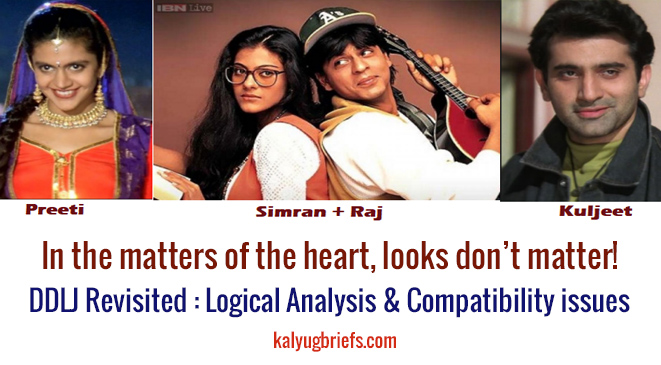 In the matters of the heart, looks don’t matter! DDLJ Revisited!

In the picture it is clearly visible that Preeti is fairer & more charming to look at than dark complexioned, joint eye-browed Simran….and Kuljeet is anytime much more handsome plus taller than Raj!

Both Simran and Raj had the option to choose ‘better looking’ life partners….but they stuck to each other – through thick and thin!

Meaning ? Looks don’t matter at all …. when you are truly in love with a person!
Conclusion – try and work on beautifying your inner self, your soul – that will definitely attract the ‘true love’ of your life!

The one with a heart of gold – will eventually win the lovely bride! 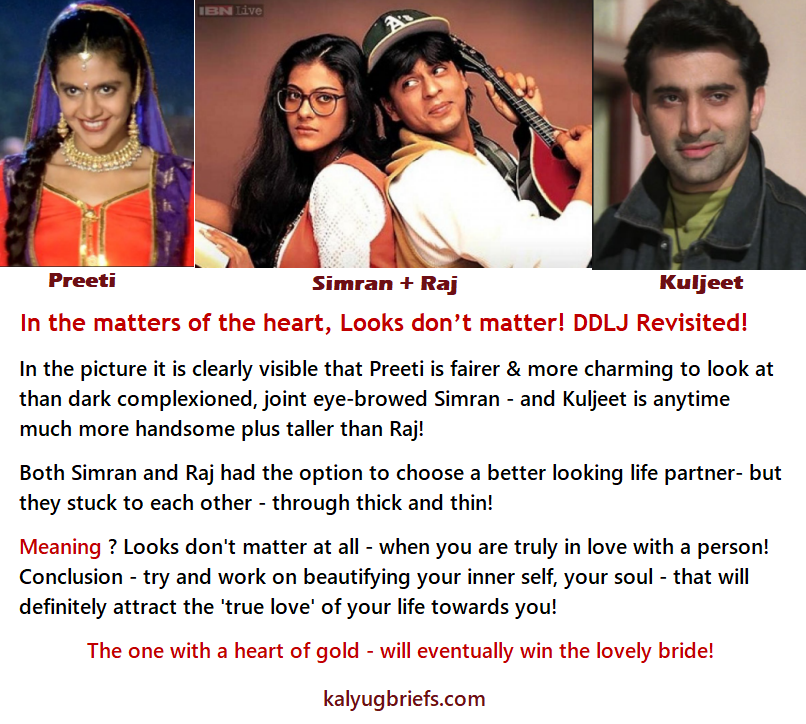 Raj used to flunk in school and college – he was poor in studies – weak academically – but because his father was filthy rich and he would eventually take over business from his father – I guess his ‘poor academic performance’ did not matter! He was also a party animal and a womanizer (clear indications were given in the film).


Simran, on the other hand, was very studious – who stood first in school & college! Hardly went out partying and did not have any male-friend as such!

Such things usually turn out to be as ‘gross incompatibility’ issues later in married life! We, the people, are fighting over absolutely unimportant issues – of caste, religion etc. – and we match such things which are not of much importance (unless of course you are some ill-bred, uncouth, ignorant rustic who still believes in such things!).

What is actually important for match-making is:

Raj & Simran’s financial backgrounds were ok – though Raj was richer than Simran but since the bride goes to the house of the groom, she can adjust to a lifestyle (standard of living) that matches with what her father provided her with – richer than her parents can be adjusted with – rather welcome to many girls – but poorer than her original living standards can create problems for both her and her in-laws plus husband.

Academic background check is a must – esp. when it’s an arranged marriage. In colleges or professional fields, when two people fall in love, they usually fall for the qualities of the person. An intelligent man or woman – with all probability – fall for intelligence of the other person. Similarly mediocre people fall for each other and so on. Of course I am discussing LOVE here – not LUST! If its lust – the female Manager can also fall for some junior/ new recruit or the peon or maybe the gateman and indulge in quickie…. and the male Manager may try his luck with every girl who joins the company!

Suffice to say – the man – eventually the ‘father figure’ of the family should be respected in the house – whatever be his qualification or job. In case of Simran and Raj in DDLJ – it wasn’t all that a good ‘pair’ because when children grow and see that mother is more superior in most matters, then the respect factor for father goes down and such children lack discipline and sense of responsibility – because such qualities come from the father and if the father is not respected, the children will not pay any attention to his existence also! Although Kuljeet, who was selected for Simran by her parents, was also not quite good – he was a womaniser, drunkard and shown as a complete egoistic bloke! So comparatively, Raj was definitely a better option for Simran…but not the best! Well – this is sadly the story of many Indian girls – incompatible spouse – leading to a frustrated life but performing the duty of raising children…a thankless job – esp. for those women who somehow adjust to ‘incompatible life-partners’ – somehow become pregnant and reluctantly perform household duties all her life!


Moral Values – if the girl or the boy has been raised with moral values and have led an ethical life throughout – then an immoral life partner is worse than death for such morally upright people! Beware! 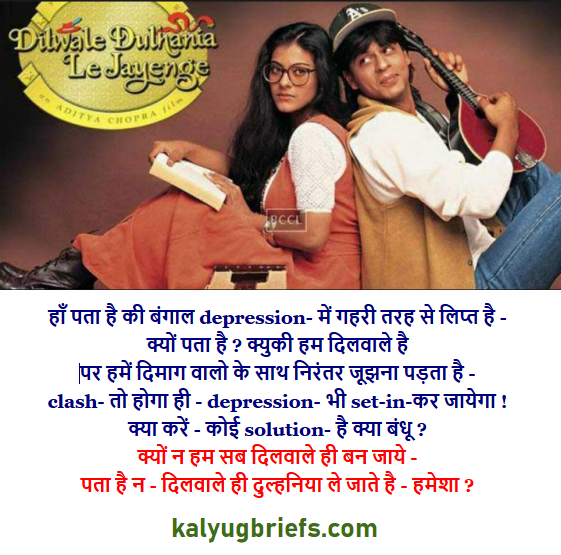