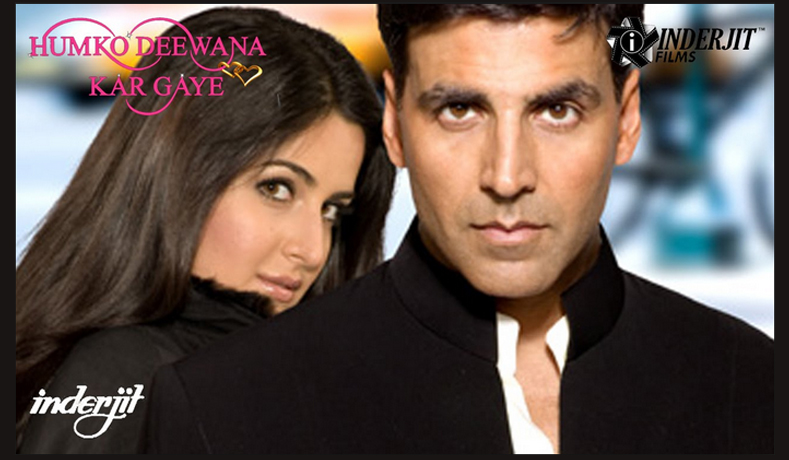 Title literally means “you made me mad & left”..or “you made me mad before leaving me”…basically a man is saying to a Lady that she is responsible for making him insane..oh! whatever – do not worry folks ! – it’s a happy ending – she does not leave him – but they live happily ever after.

Story of a workaholic man (Akshya Kumar)..well not workaholic exactly but a guy who is too busy for family occasions etc. and more into selling cars to clients. This we come to know in the first scene itself when he totally forgets about his engagement , forgets to take the ring,changes to his Party dress in the car – right in front of his Boss !

The Lady he is getting engaged to is a hard core , practical Fashion Designer (Bips) and is wearing such an attire during her engagement – as if she knew that anytime the ‘engagement’ might break off ( a Lady’s intuition) – so she was liberally showing her twin assets (voluptuous cleavage) to everyone around ( guests, parents, to-be in laws…so that if not him ..then someone else might do – that ‘someone’ else should also be ready to get engaged immediately – HOW will that happen – of course on seeing a bold voluptuous woman – anyone would get ready to marry her !)

So somehow they get engaged. They are seen flying in the next scene (flying means in an Airplane of course). Just behind their seat – an irritating sound of a cranky child crying is heard – which irritates Bips a lot – Akshya is very happy to hear the sound though – but Bips tells him that she has no intentions – whatsoever – to go for child-birth etc. since both were Professional Individuals – Very practical – very correct !

This disturbs Akshya a lot and also makes him realize that she wouldn’t make a good wife after all ..since she disagreed to go for child birth !! – indicating zero Motherly feelings – although from Bips point of view , she was right in a way – being in the Fashion World – she knew why she was so sought after – her figure and the dresses that she made the other slim (& game) models wear! She had also seen how old haggard, young, middle aged clients ..males ie. fall at their feet to lick their shoes..she also knows that all the males who come visiting/ watching ‘ramp’ walking have wives at home – looking after their children…so you see folks – from Bip’s point of view – she was absolutely right for not going for the stupidity of giving birth to a ‘thank-less’ child/ren. (refer movie Baghban to see the Thanklessness of children).


Well, Akshay had got promoted and had gone to a Foreign country where he had to share his room with a ‘dumb’ sort of a fellow. This dumb room mate of his had colored hair !..and folks this is where our Bollywood Director stealthily seeps in scenes from Hollywood movie ‘Notting Hill’ (Hugh Grant & Julia Roberts).

Akshya meets this ‘dumb looking’ girl (sorry men , but I find Katrina pretty dumb looking) – and accidentally he drops Ice crème on her shirt. He then proposes her to go to his Apartment and change. (deep sigh) Yes folks – this is the moment Akshay gradually begins to forget his Fiancée and fall in love with this stranger .

This ‘stranger’ girl is also engaged to a hard core Business man (Anil Kapoor) – and the engagement is basically a Business deal between her father & him. No love here!

Well Akshay & Katrina get pally – she tells him that her mother had a sad life – her father is responsible for putting an end to her Mother’s life etc. and blah blah – this , the dumb bloke – his roommate leaks to public – its on the papers the next day – there is misunderstanding – they part – they meet again – get married – break their respective engagements – and live happily ever after.