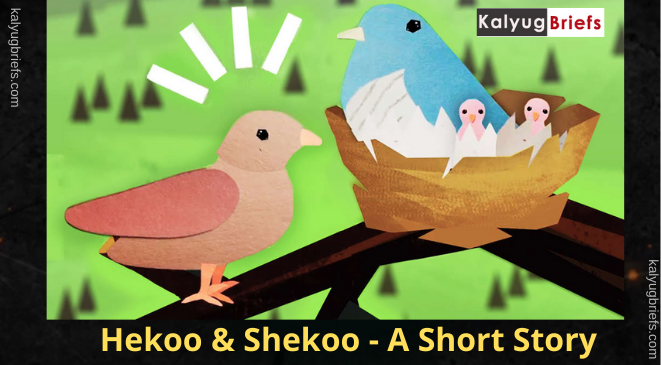 Hekoo & Shekoo were love birds. They created music that aroused love into the hearts of many – at least that is what was understood by the songs and music they created. But they did not like responsibilities – esp. of raising children, teaching or training them about the ways of the world!

After few romantic outings, Shekoo realized that she was pregnant! She told Hekoo about it and together they hit upon a grand plan. Since they both were averse to the idea of raising children, they decided to drop some similar looking eggs and replace them by their own! Hekoo went about looking for a nest where ‘similar looking eggs’ were laid. He found Mr. & Mrs. Crowey happily building a nest – Hekoo immediately realized that soon Mrs. Crowey will lay eggs.

Hekoo then took his lover Shekoo and kept a close eye on the Crowey couple. As Mr. & Mrs. Crowey left their nest to get some food, Hekoo quickly dropped couple of her eggs and let Shekoo replace them with her eggs.

Mr. & Mrs. Crowey were oblivious of such things happening behind their backs! Mrs Crowey lovingly gave the warmth to the eggs, fed them after they hatched, taught them to fly and one day they realized they had raised someone else’s kiddos! By that time they had learnt to fly and hunt for their own food….so parents were not required really! Hekoo and Shekoo’s children, now adults, flew away looking for a suitable partner to mate with – they were known as romantic birds after all – they ignited irresponsible ‘love’ in the hearts of many!

Mr. & Mrs. Crowey continued to live obliviously ever after.

Although the Love-cuckoos were known for their blasphemous/ parasitic tendencies …yet they were much appreciated by all – strange are the ways of our world!