Half Eaten Apple – A short Story 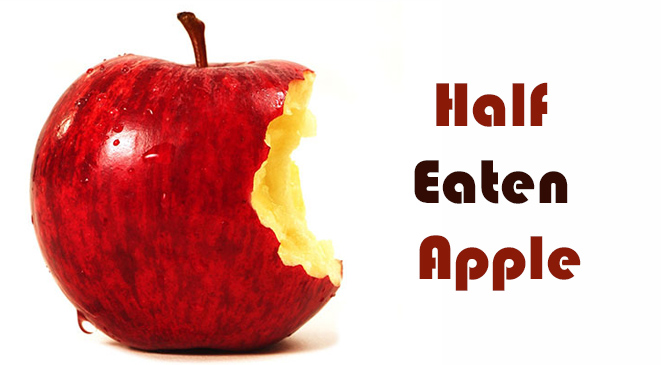 Arun came visiting Satish. He was very excited to discuss a latest happening in his life.

Satish was having his breakfast so he asked Arun to join him at the dining table.

Satish: Want to eat something?

Satish: So? What was the urgency to meet! You are almost panting!

Arun: You don’t know what happened! Priya called me yesterday evening and she asked me if I would go for a movie with her!!

Arun: Priya – Priya Saxena…..the girl we met during our tuitions in class IX remember? She shifted elsewhere and she had to leave the tuitions remember?

Satish: Oh! That Priya…yes, I remember very well – how did she get your number?

Arun: She had taken my number long ago – she still has my number…..(Arun’s eyes were shining with excitement, he was a simpleton and Satish knew him since childhood)

Satish: So? Does your number disappear by itself from cell phones or what?
Arun: No…I mean – she kept my number – she could have just deleted it!

Satish: So what are you so excited about? We all know Priya well – the opportunist that she is and a shameless flirt – there is probably not a single guy in her locality who has not slept with her…

Arun: Slept with her!? What nonsense…..they may be just lying – you cannot defame a girl’s reputation like that!

Satish: hello brother !- I am not defaming at all – it is a well known, well established fact! And why on earth will I defame her? What do I have against her?

Arun: Do you have any proof?

Satish: Proof!? Really? You are asking for proof? Don’t you remember why she left our tuitions in the first place?

Arun: Yeah – she had shifted to a new house and it was far from the tuition centre…..so she shifted..

Arun: Maybe it was a misunderstanding…

Sathish: oh shutup Arun! What misunderstanding – we all knew that she used to come earlier than the scheduled time and both sir and Priya used to come out of the bedroom….often times our classes started 10-15 minutes later –and it used to irritate us a hell lot – have you forgotten it all?!

Arun: umm….she was weak in Maths so she came earlier…

Satish: ….and went to his bedroom to learn Maths – don’t be so naïve Arun!

Arun: Where was his wife then – how can a man walk with a girl inside his bedroom when his wife is around?

Satish: because his wife was not around – she was pregnant and had gone for her delivery – so both had a good time for 2 months – till Mrs. Rustogi returned and found out what was going on! She then drove her away for good!

Arun:….ok…she was younger and Sir exploited her innocence…

Satish : Have you become her defense lawyer or what? There were other girls also in our batch – same age group and some were even more beautiful than Priya…..remember Meghna? Remember Deepa? Could Mr. Rustogi exploit them? No – because they kept a safe distance from him and completely ignored his PJs that he sometimes shared in order to impress the girls in our batch! And Priya on the other hand kept her top two shirt buttons open and bent often to show her cleavage to everyone there…you don’t remember what jokes we all made of her?

Arun: Yeah ok! She was young and maybe a tad bit silly……everyone makes mistakes…..so it can be ignored…..

Satish: Mr. Rustogi was not the only one she had an affair with huh – she was sleeping around with 3 more guys simultaneously – one from class XI and two from Class XII…..she liked a scandalous life – totally shameless bi*ch!

Arun: How come you know so many details of her? You have been spying on her or what?

Satish: She is not even worth my worn out bathroom slippers that I would spy on her! My brother was in class XII at that time and his classmates reveled in sharing the gory intimate details of their sexual escapades with her – such things don’t stay under cover for long understood?

Arun: So what are you suggesting? I should back out – not go for a movie with her?

Satish: That’s your wish – who am I to say anything? Just informing you about her – she has a habit of using and throwing boys and for her ‘money’ is the only thing that matters!

Arun: Money!? I don’t have money…..why would she approach me then?

Satish: She must have probably seen you sitting at your father’s shop of electronic goods – she must be thinking you are a rich moneyed fellow!

Arun: I have to give an account of even Rs.5/- to my dad – I am basically just helping my dad!

Satish: That she doesn’t know – as soon as she knows that, she will drop you from her list of boyfriends!

Arun: Do you think past is all that important?…maybe she has changed, maybe she is genuinely seeking a true lover….

Satish , in the meanwhile picked up an apple from the fruit basket, took a bite and then offered it to Arun.

Satish: Here , have an apple.

Arun tried to reach out to a new apple but Satish blocked his way.

Arun: Why….let me have a fresh apple…

Satish: Really?! You cannot accept the apple that I have just bitten once…and you think you can accept the wh*re of the locality as your lover and later maybe also your wife? Is that so simple? Arun, it was my duty to tell you about her character. Now it is totally up to you whether you should go out with her or not. Had you been some flirtatious wh*re monger yourself  – I would not have told you so many things about her – I would just have said – Hey! Enjoy buddy – that’s all – but I know you are a simple, honest and loyal person – you deserve a good lady as your lover and eventual life partner…trust me, don’t ruin your good reputation by mixing with her – almost everyone in our locality knows about her wh*rish tendencies – just stay away from her!! A man is known by the company he keeps  – always remember this.