When the chicken starts to taste like vegetable soup! 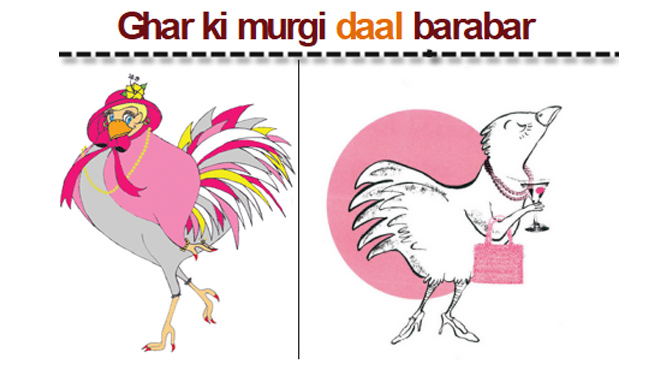 When the chicken starts to taste like vegetable soup!

When something is easily available, it loses its charm! Eg. When the girl – who initially appeared as and tasted like ‘chicken’ – begins to taste like the mundane daal (lentils soup) once you get married to her! The same feeling happens among women also – their husbands also begin to bore them…but they are not as verbal about such feelings as the boisterous blokes the males usually are ! Moreover males – esp. Indian males cannot take insult (probably because the mothers bring up the sons as ‘Prince or emperors’ always at their beck and call – which makes them feel very superior and thus cannot take/ face truth – the fact that he is basically a loser- very easily)!

Whatever she does,
however fashionable she becomes
however hard she tries to imitate some foreign murgi
use fairness creams to look like her
use anglicized accent to impress some  murga
wear lacy nylons to seduce many murgas at once…
ghar ki murgi hamesha daal barabar hi rahegi!

similarly whatever I write
even if I cite examples from best sellers
take quotes of highly evolved saints and seers
give practical scientific proofs of dire consequences
of evil, debase lifestyles…..as discussed by  psychiatrists
the slave mentality of my Nation’s citizens will remain slave-like
had the things I write and talk about emerged from the WEST
and had some gori-chamdi said the things I usually say..
it would have become a massive super-duper smash hit worldwide by now!!
Rich and affluent 1st world country after all –
even if they cough, sneeze, spit at us – we take it as some grand reward!
Hail Us! We, the Indians. 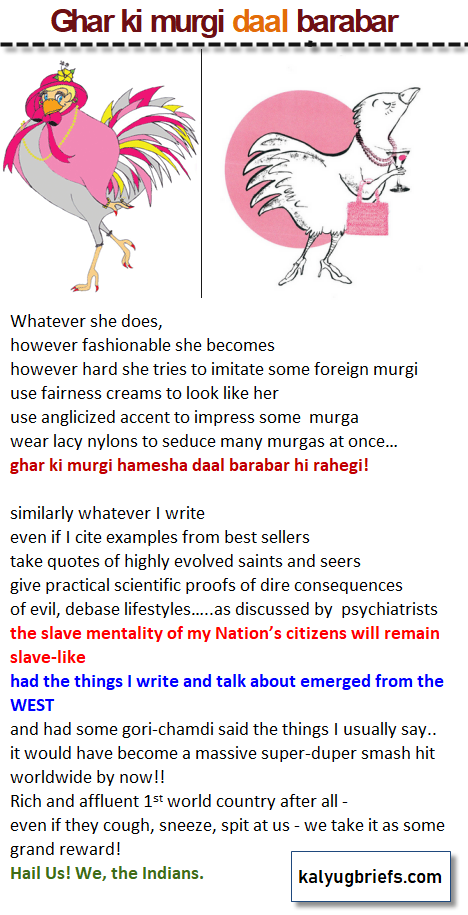