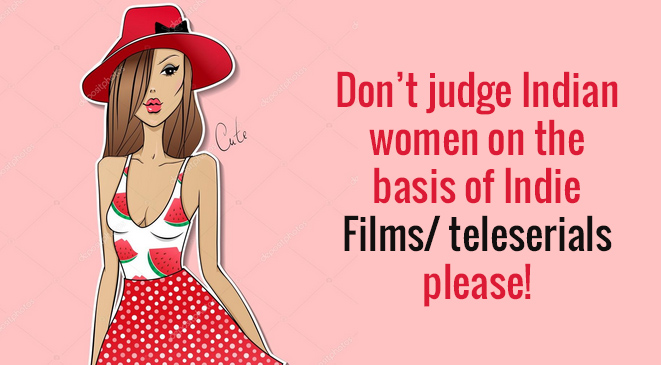 I understand that whatever is shown in films is a figment of reality – mixed with a lot of ‘garam Masala’ to lure people to cinema halls. So in order to make the film entertaining, film  makers mostly make use of semi-exposed female bodies and make them behave & appear like some absolutely daft, dumb and sex starved beep – who is dying to dive on bed with the male! Like the Lead Actress wants to only dive with the lead actor and the vamps or females playing a negative role want to dive with just anyone available – more the merrier – watch the Item numbers – raunchy females inviting pervert losers to dive on bed with!

Apart from the above two female characters, there are other females in supporting roles which may be as follows:

Sister – who is raped (rape scene is longer and closer shots taken too) and killed. Only when the sister dies after being brutally raped by the villains – does the Hero awaken from his deep slumber and goes out to exterminate the goons! The heroine remains untouched of course – because hero comes at the nick of time to save her modesty ! What kind of a psychology does that show of men!?? Ever thought about it? Well, it shows that the one a man has sex with is the most important entity in the world for him….rest of the females – sister, mother etc. can go to hell!

Mother – also mother in law. Some pathetic old woman who has achieved nothing worthwhile in life – apart from having given birth to a male and is sister – yea- the one who is eventually raped and murdered. The bother then gets drunk in the dance bar and falls in love with a dance bala – who is actually the sister of the villain who raped his sister ! wow – applause! Mother quietly receives the semi-nude dance bala as her daughter-in-law before bidding her final goodbye to the world!

Neighbours (esp. ladies) – there are some gossip mongers whose job is to do ‘haw ji haw ji haw’ up on seeing that the sedate old woman has got a dance bala as her daughter-in-law! The dance bala is shown wearing a brassier cut blouse and a chiffon saree (which is falling time and again from her front end..) and the rest of the neighbourhood women are alarmed to see such a negligibly dressed female! They are more afraid because they know that their pervert sex-starved paedophilic husbands may start ogling at her and then yearn for her – finally realizing that they have wasted their lives by marrying ugly fatsos – and then proceed to the bar to get drunk out of frustration of having stuck for life with ugly fat wives!

Finally some songs where the heroine is pouncing in a flimsy nighty with the hero and the vamps are also dancing / prancing around wearing sexy nothings to entertain the goons!

PS: Indian women have millions of household chores to do on a daily basis and if she is working then her load of work increases triple fold! Indian women are already extremely stressed out – so please don’t stress us out more by leaving behind such utterly disgusting and derogatory remarks on the entire Indian women clan!

If nudity bothers you so much then kindly sign a petition addressing the entertainment world that – we, the citizens of India, can digest our food without the glimpses of semi-nude (even stark naked nowadays)  females peeping at us from all mediums of communication – be it newspapers, TV, films, MMS, sms, whatsapp, Internet !!