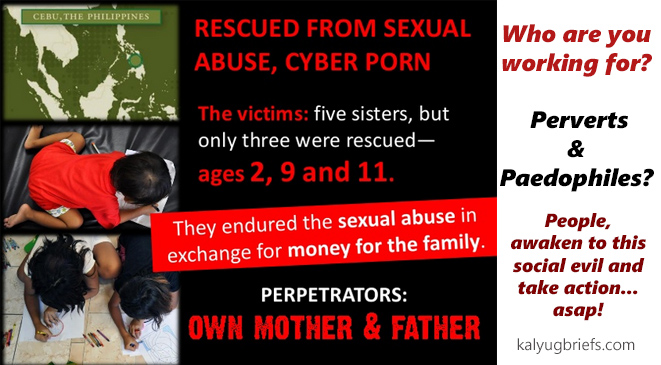 3. With the help of Regional Anti-Human Trafficking Task Force in Cebu by the United States Homeland Security and Investigations with the International Justice Mission (IJM), the kids were rescued.

4. The team found out that the siblings were being sexually exploited by their own parents in their home. The acts were done in front of a webcam for foreign pedophiles to watch real time.

5. What could be more than being while being at the very place they supposedly call home?

6. These institutions have been undertaking covert operations to rescue other victims of cyber pornography.

7. On September 6, two days after saving the three siblings from their parents, rescue operations commenced in Cebu to save thirteen minors—with ages between 8 and 17 years old— from the nightmare of sexual exploitation. Other recent operations in coordination with IJM against online pornography include saving a 13-year-old girl and her cousin from her parents in Cebu and rescuing six girls in a cybersex den in Pampanga.

8. In many parts of the country, more children are hoping that soon they will be rescued from slavery and be able to thread on a new path for a much brighter future.

10. The IJM conducted Project Lantern from 2007 to 2010 in Metro Cebu. They partnered with the PNP and provided special anti-trafficking training to law enforcers. They also provided assistance on investigation and prosecution of trafficking cases.

11. The IJM also entered into a partnership with DSWD for aftercare assistance such as immediate crisis counseling and support. They worked closely with aftercare providers to provide secure facilities and effective rehabilitation program for the victims. DSWD Regional Director Adelina Apostol and IJM Senior Vice President of Field Operations Sean Litton signed an agreement to formalize how the two agencies will work together to rescue and restore sex trafficking survivors. –ijm.org

12. Our government agencies should partner with concerned organizations, such as the IJM, and our police force should undergo continuous training because human traffickers have become more innovative in their actions.

13. Senate Bill No. 532 Anti-Computer Pornography Act Through this proposed measure, we aim to protect minors from indecent and immoral material transmitted through electronic mail and other electronic media.

14. A social worker meets with the young women to answer their questions in HerSpace, a safe government shelter reserved exclusively for trafficking survivors post-rescue. – ijm.org We must keep in mind that human trafficking, and the related problems of the illegal sex trade, forced labor, and other forms of slavery, is a complex web. Battling it requires a concerted effort from all sectors of society.

15. We must not lose sight of the fact that traffickers target the most vulnerable sectors of society, especially the youth, and this is the injustice that we must act against.