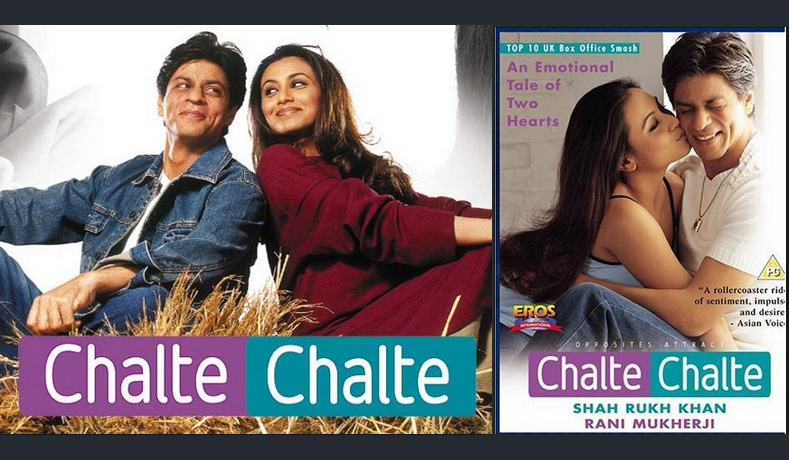 Chalte Chalte – means while on a journey…kinda it so happened….by chance…..

Story of a Truck & lorry owner (Shah Rukh Khan)- basically one who has a Transport Business.

Since it is India my darlings, so the owner has to drive the truck sometimes in the absence of his driver !

Meets the heroine (Rani Mukherjee) who has come-a-visiting India just before she is going to tie the knot with a childhood family friend’s son- good looking and tall – same cultural and educational and upbringing values – kinda heaven made match. She has been around with him since her childhood and adolescence and adulthood, both had spent enough time together during their growing age – must have shared comics, novels, shared jokes , discussed classmates, movies etc. fought over small things and then must have made up – like it happens when you are family friends.

Anyways, she meets this truck driver owner – and maybe the stars were not in her favour at that particular point of time, she falls in love with him! He impresses her by saying things like he will be like an obedient dog to her, he knows homeopathy so he can cure minor health ailments thus saving money etc.

She rejects him and goes back to her foreign home – he follows her there- waiting to see her in her bridal dress at least -see the last of her ie. – she ultimately decides to marry him! For God only knows what reason – the movie tries to imply that she fell in love- FELL mind you -so apt is this word indeed!

They come back to India and he opens his flat door  -he is an orphan mind you – and because he had seen in movies and other families to take the impression of the newly wed bride’s feet , he brings Talcum powder and asks her to step on it – thus making an impression of being ‘Cool’ – making fun of age old rituals ! anyways they begin to pay for it soon.

She belonged to a high class, cultured and educated family whereas he was an orphan with no family or cultural background ! So started the fights – wet towel on dry bed much to her annoyance, shoes and smelly socks thrown all around the house, no civic sense in hubby – she tries her level best to adjust to his style- uncouth and coarse style ie.

He understands her problems- starts to spend more time in office to earn more – all for her – come home late and watches TV –  while she is cooking and washing the utensils  – as they cannot afford to keep a maid for dearth of money – imagine a rich, high class girl washing utensils and cooking for husband !

(Attention men: this does not happen in real life – an educated and balanced woman will always look for a match either of the same level or higher – definitely not lower – the body / mind / soul system does not accept it so easily ‘unless it’s a natural calamity or some accident in the family/society that drastic change of life style takes place eg. Tsunami hit children probably will have no choice) they even plan to have children on top of dearth of money !

Some stupidity it is really – why bring a baby when you cannot provide for its basic needs and necessities ? Such children, who grow up in financial crunch / dearth but at the same time see that his/her classmates bring cakes and patties for tiffin, they become jealous and greedy and later ask their parents what have they provided them with anyways ?- (refer. son Samir Soni’s dialogue to father Amitabh Bachhan in Baagban).

In one scene Rani calls the washer- man by his name to her rich Aunt’s surprise ! she was amazed at the fact that Rani called him by his name ! whats so amazing about this is what I failed to understand !! with so many revolutions – green and white etc. where equality begets equanimity etc. has been talked about still there are IDIOTS who think that knowing the name and addressing the helper by his/ her name is a shame !! such IDIOTS should better be kicked out of the country – rather the world.

Anyways the inevitable happens -there is a calamity in office and they get under pressure of paying heavy debts. Wife seeks ex-flame’s help financially and hubby truck driver becomes jealous ! He insults both wife and ex-flame – teases him for being Brand conscious – wearing branded shirts – basically showing his true color- a loser in all respects – unsuccessful husband and business man !

Wife decides to leave him for good- he runs to the airport to get her back- after all he had also got the taste of ready food, washed clothes, dry bed sheets etc. Wife comes and start to live together again.

Lesson : Look before you leap. The heroine leapt for a more or less ‘total stranger’ - that was the wrong move. She should have married her childhood friend!

PS- The truck drivers and other subordinates did not look the kinds to go to…..you know what na? That which the Truck drivers are famous for- going to the brothel ! they all looked pretty decent to me in fact. Anyways that is a movie – and a hindi movie on top of that !