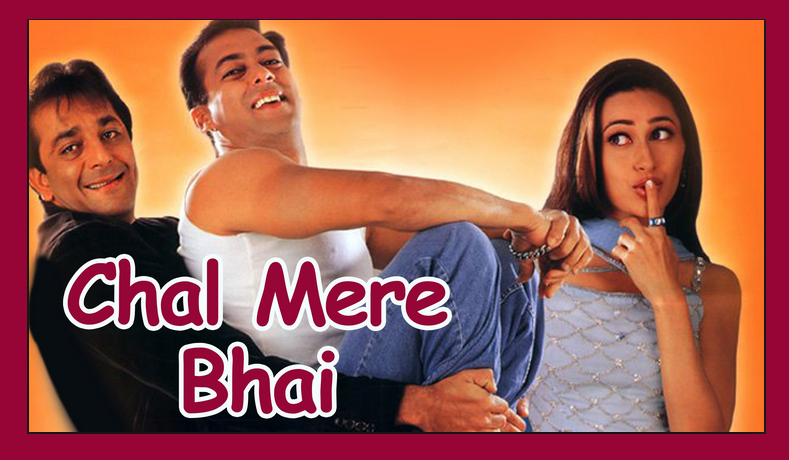 Extra Shots: The title of the movie must have got its inspiration from a yesteryear movie – Naseeb – where Rishi Kapoor is playing the role of Amitabh’s brother – Amitabh gets drunk and Rishi had a tough time in counselling him back home – he sings thusly : Chal mere bhai tere haath jodhta hoon” – meaning “Please brother – come lets go home – I beg of you “

Anyways story of two rich brothers who fall in love with a poor, dumb, common woman who had joined their Company as a mere Secretary.

The villainous rich men are very intelligent basically – they usually look for a financially poor girl for progeny maintenance and non-interfering in nature so that they can have several ‘keeps’- in every state that they have an office and they visit once a while !

Here both the brothers want to give Flowers to the same girl !! – Really just like misfortunes do not come alone – similarly fortunes also do not come alone – it comes accompanied with …not one but two equally competent contenders…in this case ie.!!

The female species of the animal kingdom sees which one is more powerful – having superior set of genes – well that’s what the animals think since they did not have a personal Scientist like we had in G.John. Mendel – finding about the genes etc!

The animal females think that the one who overpowers the other one physically is stronger…since we are also rational animals – our animal instinct is yet to be curbed. Men still fight among themselves to prove their superiority to women so that they can win …them …with all their things….like the rich mines, the dense forests, the great water falls, minerals..cheap human resources which Mother India has…..