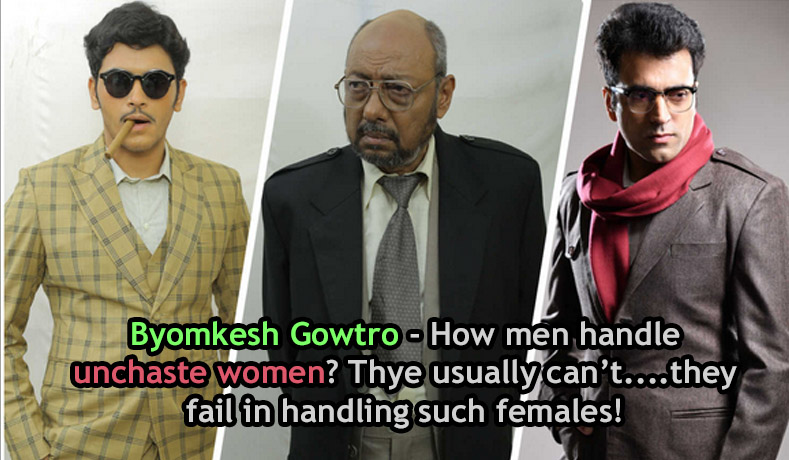 First of all – kudos to Mr. Sharadindu Bandyopadhyay for writing Rakter Daag – which means ‘tarnished blood’. The film is based on the story of Rakter Daag. He has shown the importance of purity and chastity among both men and women…or else you lead a life full of miseries! The couple were rich and very well off…yet they hardly got any moment of happiness in their lives….such is the life in absence of moral values!!

So there is this rich businessman who has a huge bungalow in a hill station – Mussoorie. He has a daughter who is very flirtatious and adventurous  (basically immoral) and likes to sleep around with random men – whoever catches her fancy kinds! Because the film story dates back to 1960’s, the usage of condoms or the availability of condoms were rare and so was unwanted pregnancy termination tablets – not very easily available! Thus the daughter becomes  pregnant and she cannot tell who the father was…she was after all having an affair with many…..so in absence of sophisticated DNA tests etc…the male who made her pregnant went scot free!


The father now had to look for a suitable groom immediately for his daughter or else people around would start blabbering  about a child being born out of wedlock (awww…kuch to log kahenge – we are born to blabber you see)- as if people were not already talking about her flirtatious and shamelessly sleeping around nature!!

As it happened – still happens in fact, the father finds a bright but poor employee in his organisation and asks him to marry her. The poor employee was very happy at the proposal and the fact that he became rich overnight!

But all his excitement doused down on the 1st night itself! He found the wife was pregnant from beforehand…..and she could not even tell the name of the father…like had it been a case of jilted love story – poor innocent lady deeply in love – let the lover explore her more deeply – got pregnant and then was kicked on the butt by the lover – still understandable…..but here she could not tell the name of the male who had impregnated her….as she was dating random males at the same time – this her husband could not tolerate and thus the marriage never consummates!

Son is born after 4 months of marriage. Son grows in a loveless environment. Well, whether the mother invited random males to her house – since she was not having any relationship with her husband – has not been shown in the film! Apparently, she decides to become a sati-savitri (epitome of chastity) after child birth – so the ex-sex-starved and incorrigibly flirtatious female gets busy learning classical music and did riyaas (practice) all day long…..quite a pandemonium she created in the otherwise quiet house!


Son grows up and becomes 20 years old…when someone tells him that his father – who loiters around in his house and who he has been addressing as father since his birth…is not actually his father! He asks his mother about it and realizes that his mom had been an incorrigible flirt in her youth and he was born out of some random male she slept with one fine night…or maybe 2-3 fine nights – who knows!

The son then decides to carry on with what his mother left after marriage…..become an incorrigible flirt himself and make the lives of men around (fathers, brothers, lovers, husbands) – absolutely miserable…by flirting and convincing the females of different families to sleep with him!! Wow! Like mother, like son……and like many other sex-starved flirtatious girls in the locality. 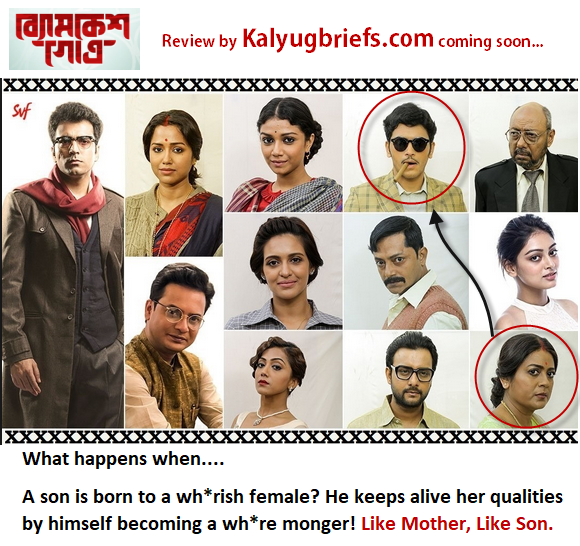 Refugee status: One more thing has been shown here – the fact that poor refugees are made to do all dirty works by people with money and power. Because couple of refugees were given shelter in the house, they were exploited by the babus of the house….they had no option also I guess….for the empty stomach without a shelter on top – they have to compromise with sheer idiocy!

And these missionaries who convert people to Christianity! The female who is given shelter by the missionary people is a night club cabaret dancer!!?? How did she gain by being associated with the missionaries or Chcristianity when eventually she had to perform in front of sleazy sex starved alcoholic loser pigs at night?!

By the way, the flirtatious fellow gets murdered…who killed him is solved by detective Byomkesh.