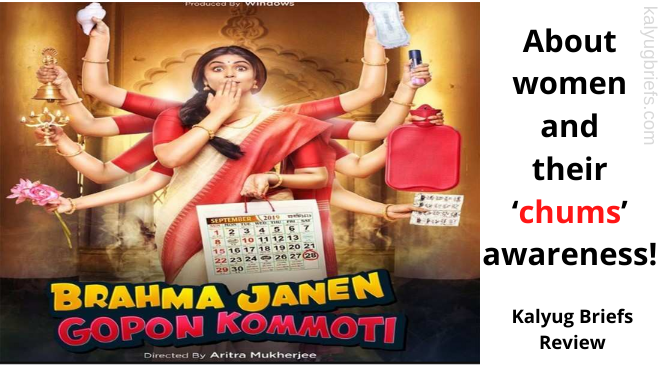 About women and their ‘chums’ awareness!

The film starts with a drama where Queen Panchali (character from Mahabharata, wife of the 5 Pandava brothers) was dragged to the courtroom with the intention to be disrobed by the Kaurav brothers in front of all the senior administrative officials including the king! Their intentions were thwarted by the intervention of Shri Krishna and he saved the Queen from being humiliated and insulted publicly!

The story behind is that when she was being dragged to the courtroom, she was having her periods (chumming) and in India, a woman is asked to rest during her chums – since a lot of weakness and energy loss happens when you bleed for 5 days. This basic necessity to rest during periods got twisted badly as we evolved (dissolved?) and people started mixing up ‘chums’ with being untouchable and impure for 5 days of the week before bath…after that she again becomes touchable and is expected to work like a horse!

Shri Krishna is the 8th incarnation of Lord Vishnu and is worshipped worldwide. What the film tried to show was that if Shri Krishna Himself came to the rescue of a lady during her chums – how can it be considered so impure – that women are not allowed to do anything auspicious during those days! Anyways – everything is taken to an extreme by humans – esp. when it comes to religious dogmas…because basically there is no way to check the authenticity of superstitions! Well well…make hay while the sun shines – a time will come when each and every superstition will be burnt to the roots by we, the people!

The film tried its best to create awareness about women and their chums. In Indian villages, women are still treated like muck during their periods!