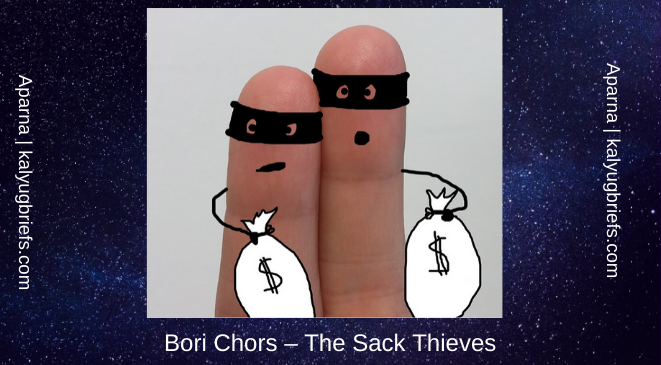 Changu and Mangu were petty thieves. One day they found a rich thief Daku Lal who recruited them and got them trained. Because they were juniors, they were given simpler jobs – like stealing empty sacks from places where construction works were going on! They did so and to their surprise they got Rs. 20/- per sack. They thanked God for their sheer stroke of good luck for having met Daku Lala. Daku was a gregarious person – he knew how to motivate his people well. Once or twice a month he used to take Changu and Mangu to big restaurants and fed them good food. Daku had become like God to both of them!

Slowly and gradually both started getting paid for other jobs too – like stealing tyres, mobile phones etc and they were happy with their lives! They used to get discount at the local brothel as well – they had never had sex and it was only after joining Daku that they came to know the ecstasy of sex – it made them very confident being attached to a gang although they were asked never to divulge the name of their gang or their gang leader since the world is wicked and doesn’t treat thieves or murderers well!

But their happiness was short lived. Suddenly the cops came from nowhere and dragged them to the Police Station! Both Changu and Mangu were surprised and asked the cops as to why were they dragged like animals to the Police station!

The cops showed them a blood stained sack and asked them if they knew anything about it. They denied point blank!

Couple of constables started hitting them.

Mangu screamed with pain and said they will pay them Rs.50/- per sack although they themselves got Rs.20/- for stealing it.

Before Mangu could speak, Changu said – How do you know that we have stolen this sack – as if we are the only sack stealers in this locality?

Officer – Unfortunately, these sacks are marked and have a serial number, so when we found a dead body of a 7 years old girl inside it, we started our investigation..and the site where the sacks are stolen from had cctv all over and both of you are caught in the camera while you were stealing the sacks.

Dumb Mangu spoke up – But we stole at night when no one could see us! Not even the cameras!

Changu gave him a dirty look…the fact that he confessed like a fool!

Officer – Anyways, whoever you stole it for is engaged in girl child kidnapping…you know what it means, I guess?

Both Changu and Mangu were clueless about it.

Officer – Well, it means that the sack for which you got a measly Rs.20/- is actually made use of to make lakhs…so whoever you work for is just fooling you and not even giving you your worth! You see you took the risk of stealing the sack and now you are getting beaten by the cops also – whereas your boss is happily sitting in some 5 star hotel and sipping chilled beer!


Mangu – But how can a sack fetch lakhs?

Officer – Oh! You don’t know? The sack is used to kidnap children when they go out in the fields early in the morning to answer nature calls…each child is then sold in either sex market or organ harvesting market – they make lakhs in no time!

Both Changu and Mangu were dumbfounded!

Officer – Anyways – do you know anyone who will bail you out?

Officer – Very well then, rot here in the jail – be loyal to your Godfather.

Saying this the officer left with his constables. Both the thieves were left alone in the prison cell – seething with anger….they felt betrayed by their Godfather …

Mangu – They make us do all the hard work and themselves live lavishly! The brutes!

Changu was in deep reverie. He was wondering if he could himself do the job of selling children, even his life would have been so luxurious!

Changu – Daku bhai underestimated us….if only he had told me that he is involved in child kidnapping or organ harvesting..he could have just told me that – I could have got him a battalion of children!

Mangu – Really? From where?

Changu – From my village! Where else? We would not even have to kidnap – they would have just come with me to town….

Mangu – But why would they just come?

Changu – The villagers are poverty stricken – they produce children just in order to sell them…if only Daku Bhai had mentioned this to me – I too would have made a house for myself by now!

The cops in the meanwhile went to arrest Daku Lal…they had been listening to their conversation….they knew pretty well that they will take their boss’s name to abuse him….

Daku Lal regretted having recruited the dumb uncouth villagers in his gang!

So in this way 2 petty thieves from a remote poverty stricken village got underworld don Daku Lal arrested and sentenced for life-imprisonment.

Lesson: Poverty anywhere is a threat to prosperity everywhere!