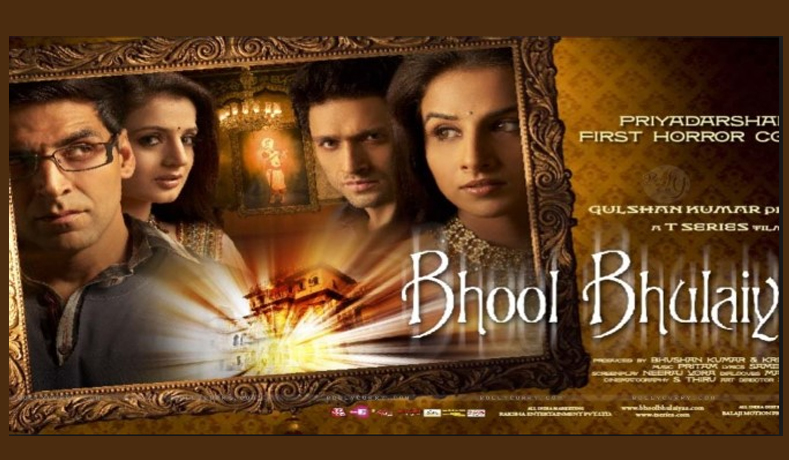 Shiny marries Vidya and brings her to his ancestral house. She was a weak personality- since during her childhood, her parents had left her with her grandmother and had gone abroad for material gains. Parents were confused about priorities of life – thus the daughter grew up to be  meek weakling !

As a young child, she spent most of her time listening to fairy tales as told to her by her Grand Mother (and we all know what kind of stories can an illiterate ,village bred aged lady tell her grand child – all about Kings and lonesome Princess under some spell /demon etc. and how the Prince comes to rescue her and blah blah !). Later her parents come and take her away from her Grand Mother and she is introduced to a totally new life style abroad. Well such girls usually copy whatever they are exposed to for basically they have no one to tell what is right and what is wrong – her own parents were after all complete blokes !
Thus Vidya wears all kinds of western dresses and attains the nuances of the ‘gori chamdis’. Shiny meets her and falls for her.They get married and he brings her to his ancestral, dilapidated home.

Now that house was possessed by a  vindictive spirit (soul/atma/bhoot) of Monjulika – a dancer whose lover was killed right in front of her own eyes by the tyrannical King. Because her spirit resided in that house – so the upper storey was completely blocked for visitors. Vidya being a modern girl opens the door and invites in herself the  sad and vindictive spirit of Monjulika. Monjulika possesses her but controls her speech and body in such a way that no one comes to know that she is actually possessed by the sad spirit of Monjulika.

A whole lot of ruckus gets created and Akshaya,  the Psychologist – is invited to treat the patient -Amisha Patel – as Vidya tries to point the blame on her all the time. But Akshaya finds out that the one actually possessed is Vidya -in whom  Monjulika resided ! Now according to Monjulika, the owner of the house was the king – who was none other than Shiny ….. thus Monjulika wanted to take revenge by killing Shiny !

So with the help of a senior ‘Spirit possession treatment provider’ Akshaya manages to drive away the unquenched spirit of Monjulika from Vidya’s body.

Surprised to see that Psychiatrists , Doctors, Psychologists – who belong to the branch of Science believe in ghosts and evil spirits —-that they actually also have ways to drive away ghosts and possessions. This only happened in remote villages – how come London returned Scientists also participated in such ‘Bhoot Bhagao Andolan’ ..its surprising !!


Controversial title song : Hare Rama , Hare Krishna – the song’s video shows semi nude girls showing their buttocks and teats !! Amazing ! in a country like Ours -where people have died in the name of religion and God (Rama Janam Bhhomi and Babri Masjid) and now the latest Rama Setu – the Bolly bullies had the audacity to depict the song so cheaply !! Well this proves only one thing – that they have kept the old haggard people (men) in power and position amply happy (by supplying sexy ,educated, English speaking prostitutes to feed their egos and quench their sexual thirst !!).

The other day it was shown in Aaj Tak (maybe not sure) that Item girls named Jhanvi, Carol etc sell cocaine and serve as prostitutes and earn around Rs. 50,000/- per 2 hours !! -but the News Channel  Team blurred the face of the – drug peddler plus whore –  why? Simple reason – if such females earn 50,000/- per 2 hours – they can easily hire the services of some corrupt ,greedy ‘Kala coat wala’ Advocate and sue the entire News Channel – and it can even close down ! So for the Reporters, Journalists, peon and others working there together probably get a salary which adds up to Rs.50,000/- at the end of the month. )